Discover the Dark Secret of ELIZABETH HARVEST on December 4th! 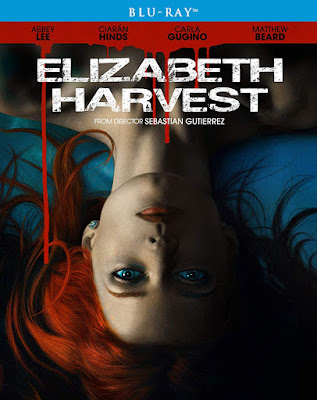 In an effort to put some money back into my personal coffers, yours truly has drastically cut back on collecting Scream Factory titles in the past year. Though temptation does rear its head every now and again, it has been easier to say "no thanks" to many of Scream's newer releases because of recent (some would even say drastic) price increases. And typically I don't really bat an eye when a new IFC Midnight title appears on their release slate, but I've gotta say... I really want to see ELIZABETH HARVEST! It has a hell of a cast, and looks like it could have an interesting plot, and some very intense moments! I'm getting kind of an EX MACHINA vibe from it, and that's not a bad thing!

Synopsis: Nothing is as it seems in this brain-bending plunge into our darkest desires. Elizabeth (Abbey Lee - THE NEON DEMON), a beautiful young newlywed, arrives at the palatial estate of her brilliant scientist husband Henry (Ciarán Hinds - JUSTICE LEAGUE, The Terror). Ensconced in modernist luxury with an obedient — if slightly unsettling — house staff (Carla Gugino - GERALD'S GAME and Matthew Beard - THE IMITATION GAME), she has seemingly everything she could want.

But one mystery tantalizes her: what is behind the locked door to Henry's laboratory that he has forbidden her to enter? When an inquisitive Elizabeth dares to find out, everything she thought she knew about her husband — and about herself — will change. Elizabeth Harvest casts a spell of creeping Gothic menace as it unravels a disturbing tale of identity, obsession, and twisted love.

Extras:
ELIZABETH HARVEST will be available Tuesday, December 4th wherever Blu-rays are sold and should cost between $15 - $19. Order a copy today from AMAZON, BULLMOOSE, or directly from SHOUT! FACTORY.