Scream Factory Delivers a Trio of Horrible Horrors on Blu-ray, Just in Time for Christmas! 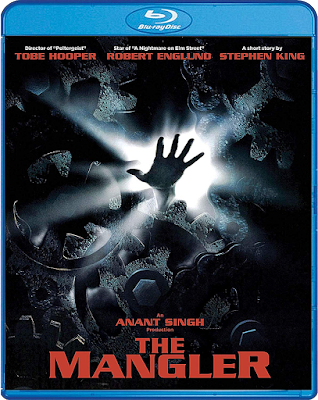 Egads! As 2018 nears its end, Scream Factory is bombarding us with a final trio of fright flicks on December 11th and boy are they... something! I recall renting THE MANGLER on VHS after its failed theatrical run in 1995, mainly because of he big names that were attached. Needless to say, I was not impressed and never revisited it. SILENT NIGHT, DEADLY NIGHT PART 2 is a definite guilty pleasure that won me over after a few viewings, and I'm truly happy to see that it has built up enough of a cult following to warrant a Collector's Edition Blu-ray.

Sadly I cannot say the same for TEXAS CHAINSAW MASSACRE: THE NEXT GENERATION which I haven't seen since its cable TV premiere on (I believe) Cinemax. But now that a few decades have passed... maybe it's time to sit down and give it another shot? (NAAAAAAAAAAAHHHH! Hahahaha!) If you're as excited as I am(?) about these new titles, continue onward for all the juicy details on their new specs and extras!

Based on King's short story, this white-knuckle chiller follows a cop (Ted Levine - THE SILENCE OF THE LAMBS, THE HILLS HAVE EYES) as he investigates a series of grisly accidents ... and uncovers a deadly town secret that has been hidden for years – a terrifying entity that threatens to destroy everything in its path. With time running out and a young girl's life in the balance, he races to destroy the beast before it’s too late!

Extras:
Scream Factory's Blu-ray of THE MANGLER is due out on Tuesday, December 11th, and also features reversible cover art (something not always offered on their non-Collector's Edition releases). As is the case with many of Scream's recent titles, this one is rather expensive, with a $28.00 price tag. If that doesn't scare you off, then pick up a copy from AMAZON, BULL MOOSE, DIABOLIK DVD, or directly from SHOUT! FACTORY. 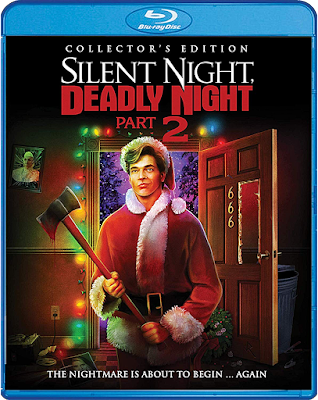 Synopsis: IT'S GARBAGE DAY! Ricky is being released from a mental hospital. He takes with him the terrifying memory of his brother Billy's death and the memory of Mother Superior who brought about his brother's demise.

For Ricky, starting a new life means avenging his brother's death, which sets him on a blind journey of relentless revenge, leading ultimately to Mother Superior. And when he gets to her, not even her faith will be enough to stop Ricky as he follows in the family tradition of Christmas carnage.

Extras:
SILENT NIGHT, DEADLY NIGHT PART 2 will also be available on Tuesday, December 11th and should cost between $28 - $30! You can pick up a copy now from AMAZON, BULL MOOSE, DIABOLIK DVD, or directly from SHOUT! FACTORY (which will also net you a Limited Edition poster)!

But if you REALLY love this movie and have more money to burn, may I suggest to you the DELUXE LIMITED EDITION release? Your Blu-ray will come with the poster plus an official NECA action figure of Eric Freeman's Ricky! Supplies are limited (only 2,000 exist!) so CLICK HERE to get yourself and early Christmas treat! 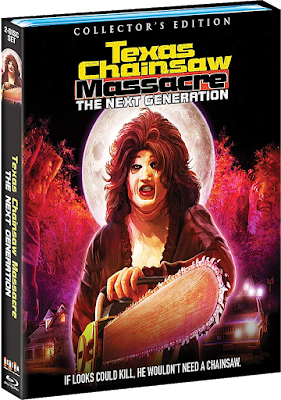 Synopsis: When a helpful family invites two lost couples in for a good ol' down-home massacre, the prom night teens find themselves all dressed up ... with no place to escape. Renée Zellweger and Matthew McConaughey star in this hilarious bone-chilling remake of the horror classic.

Extras:
You can finally complete your TEXAS CHAINSAW MASSACRE collection on December 11th Vault Dwellers for the (not so) low price of $25 - $35! While that is pricey, I'll admit that the new interviews, audio commentary, plus two cuts of the film does take the sting out of it a bit! Get yours now from AMAZON, BULL MOOSE, DIABOLIK DVD, or directly from SHOUT! FACTORY.

Posted by The Vault Master at 3:21 AM