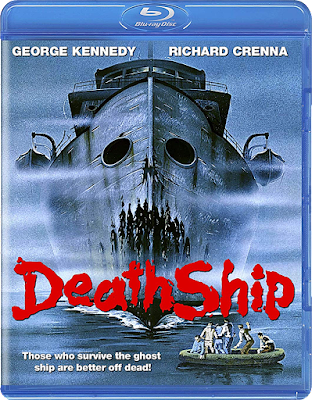 SCORPION RELEASING'S NEW BLU-RAY OF "DEATH SHIP" IS A DEFINITE UPGRADE FROM ALL PREVIOUS RELEASES!

I've never seen DEATH SHIP (or DEATH SHIT as the webmaster of Badmovies.Org "lovingly" refers to it), but always remember seeing its cool poster design in the Horror section of my local mom & pop video store. Even after Scream Factory put it out on Blu-ray, I failed to obtain a copy before it went out of print. But thanks to Scorpion Releasing, DEATH SHIP is back and better than ever before, with a new 2K transfer, and a new 5.1 audio mix!

Synopis: Academy Award winner George Kennedy (CREEPSHOW 2) stars with Richard Crenna (the RAMBO series), Nick Mancuso (UNDER SIEGE), and Saul Rubinek (TRUE ROMANCE, UNFORGIVEN) in this terrifying tale of a possessed ship searching for new victims on the high seas! An ocean liner carrying vacationing passengers collides with a mysterious freighter. The handful of survivors seek refuge aboard the sinister ship, which turns out to be a Nazi torture vessel that is possessed by the evil that once commanded it! It has a life of its own.... pray you are never rescued by the DEATH SHIP!

Extras:
DEATH SHIP will be available to own on Tuesday, December 11th, and should cost between $18 - $25! You can grab a copy of the standard edition of DEATH SHIP from AMAZON or BULLMOOSE. I say "standard edition" because earlier this year (in May) a Limited (to 1,500) Edition came out, that was Region Free and had a collectible slipcover. If that makes any difference to you, then you'll be happy to know that you can still procure a copy (for $25) from DIABOLIK DVD and RONIN FLIX.

Posted by The Vault Master at 1:30 AM