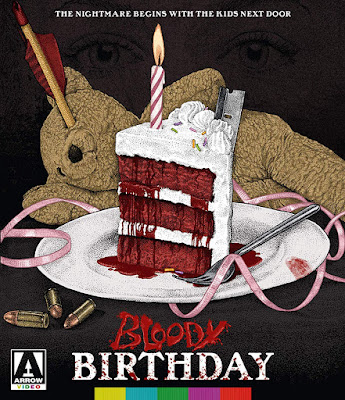 I have heard about BLOODY BIRTHDAY from numerous friends, but I have yet to actually sit down and watch it. And once I do, I believe that I'll invest in Arrow Video's new Special Edition, which looks to be a notch or two above Severin Films' 2014 BLOODY BIRTHDAY Blu-ray! Let's take a closer look!

Debbie, Curtis and Steven may seem cute as buttons. But their angelic facade conceals the wicked, murderous streak given to them having all been born under the same solar eclipse. With the grown-ups around them blissfully unaware of their little darlings' homicidal tendencies, the evil brats begin to bump off the adults one-by-one. By gun. By arrow. By cake. Bye-bye!

Mixing the killer-kid subgenre with elements of the then-booming slice-and-dice movie, 1981's BLOODY BIRTHDAY shocks and appalls with its scenes of young children shooting, strangling and bludgeoning their way through the local population. They sure don't (and can't!) make 'em like this anymore.

Extras:
Arrow's Special Edition Blu-ray of BLOODY BIRTHDAY will be available at all Blu-ray retailers on Tuesday, December 18th and should cost between $22 - $28! Order yourself a copy now from AMAZON, BULLMOOSE, or DIABOLIK DVD!