On December 11th, Get Yourself a Fistful of Westerns from Arrow Video and Shout Select!

CELEBRATE FIVE DECADES OF NERO AND EASTWOOD WITH THESE NEW BLU-RAY RELEASES!

UPDATE: 05/23/2020 - After almost two years, Arrow Video's DJANGO Blu-ray is finally getting released! If you missed out on the Limited Edition (or Steelbook) the last time (like most of us did) you can snap up a copy on June 30, 2020!


UPDATE: 12/10/2018 - Arrow's DJANGO discs are currently ON HOLD (so if you somehow got one, count yourself lucky!) There is a review embargo in place, and the disc is not being shipped due to (from what I've ascertained from several sources) rights issues! I'll post more info as I receive it!

Because I'm quite possibly insane, I task myself with owning the best possible edition for just about every movie in my personal collection. That means that I am constantly double-dipping on titles I already own on DVD or Blu-ray.

And now here I am once again, on the cusp of upgrading two of my favorite Westerns: DJANGO and HANG 'EM HIGH, a pair of films warning of the dangers of leaving someone for dead! While DJANGO fares better (4K restoration, lots of extras, and a bonus film!), HANG 'EM HIGH's Blu-ray does offer up a pair of new audio commentaries! For a closer look a these new releases, please continue reading pardners. :: tips hat ::

Synopsis: In this definitive Spaghetti Western, Franco Nero (KEOMA, THE FIFTH CORD) gives a career-defining performance as Django, a mysterious loner who arrives at a mud-drenched ghost town on the Mexico-US border, ominously dragging a coffin behind him. After saving imperiled prostitute Maria (Loredana Nusciak), Django becomes embroiled in a brutal feud between a racist gang and a band of Mexican revolutionaries...

With DJANGO, director Sergio Corbucci (THE GREAT SILENCE) upped the ante for sadism and sensationalism in Westerns, depicting machine gun massacres, mud-fighting prostitutes and savage mutilations. A huge hit with international audiences, Django’s brand of bleak nihilism would be repeatedly emulated in a raft of unofficial sequels.

Synopsis: Released as DJANGO 2 in some territories, TEXAS, ADIOS features Franco Nero as a Texan sheriff who travels across the frontier into Mexico with his younger brother to confront the man that killed their father! 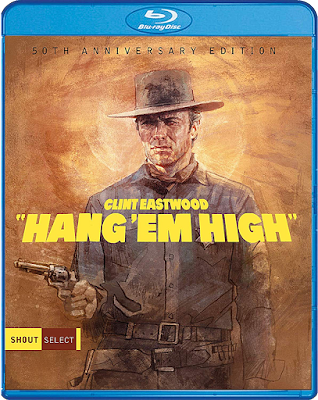 HANG 'EM HIGH (1968)
Synopsis: They strung him up. They left him to die. But they made two fatal mistakes: they hanged the wrong man ... and they didn't finish the job.

Oklahoma, 1873: Jed Cooper (Clint Eastwood), mistaken for a rustler and killer, is lynched on the spot by crooked lawman Captain Wilson (Ed Begley) and a rampaging band of vigilantes. But as Wilson and his gang flee the scene, there's one very important detail they've overlooked — Cooper is still alive!

Saved in the nick of time by a marshal, Cooper takes on the job of deputy marshal in order to bring hard-handed justice to the Oklahoma territory ... and to the nine men who "done him wrong." Co-starring Inger Stevens and Pat Hingle, HANG 'EM HIGH is a savage and action-packed western adventure, presented to you in this celebratory 50th Anniversary Edition!

Extras:
Shout Select's 50th Anniversary Blu-ray of HANG EM' HIGH is also available on Tuesday, December 11th, and should cost around $30! (Ack! HANG 'EM HIGH? More like PRICE 'EM HIGH!) Yeah that's a bit steep, especially considering that it seems like they just ported over the previous transfer from the much cheaper MGM Blu-ray, but the two new audio commentaries might just be worth it? If you have your heart set on owning this 50th Anniversary release, get it now from AMAZON, BULLMOOSE, DIABOLIK DVD, or directly from SHOUT! FACTORY.

Posted by The Vault Master at 2:11 AM