Get Scream Factory's New Collector's Edition Blu-ray of KISS OF THE VAMPIRE Today! 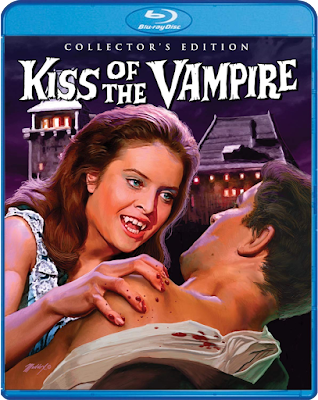 While I already own Universal's 8-film HAMMER HORROR COLLECTION on Blu-ray (which contains KISS OF THE VAMPIRE), I have to admit that Scream Factory's Collector's Edition re-releases of the Hammer films contained in that set have become extremely tempting. With multiple bonus features, new HD transfers, and Mark Maddox's fantastic artwork on their covers, I find myself glancing at those new Hammer Blu-rays more and more frequently - it's only a matter of time before I finally cave and start adding them to my collection.

Speaking of which, Scream's new KISS OF THE VAMPIRE Blu-ray is out of this world! Featuring a new 2K scan of the film (which is featured in two different aspect ratios), new and archival extras, and an alternate TV edit of the movie, this is definitely a must-have release. I mean damn.... look at that cover art! It's just plain gorgeous!

Synopsis: Lost on the way to their honeymoon, a young couple stumbles upon a mysterious family of vampires and their unspeakably evil leader. When a wrong turn leaves newlyweds Marianne and Gerald Harcourt stranded in a remote Bavarian forest, they have no choice but to accept the hospitality of the hypnotic Dr. Ravna, distinguished lord of a nearby castle. Ravna uses his "children" to lure the newlyweds to his lair, and soon they are plunged into a nightmare of horror and deception from which there may be no escape. Their only hope is Professor Zimmer, who calls upon an ancient ritual in a desperate attempt to destroy the vampires and free Marianne from Ravna's power

Extras:
While not one of my favorite Hammer titles, I still very much enjoy KISS OF THE VAMPIRE and am impressed by the amount of effort put into this release! With two cuts of the film, multiple commentaries, the TV edit, and new featurettes, I'd be more than willing to snap this up and place it proudly on the shelves with my other Scream Factory discs! KISS OF THE VAMPIRE is now available wherever Blu-ray discs are sold and should cost between $23 - $29! Get a copy right now from AMAZON, BULL MOOSE, DIABOLIK DVD, or directly from SHOUT! FACTORY (which will also net you an exclusive 18 x 24 rolled poster featuring the new cover art done by Mark Maddox)!

Posted by The Vault Master at 1:17 AM