ORCA Finally Gets Its North American Blu-ray Debut Thanks to Scream Factory! 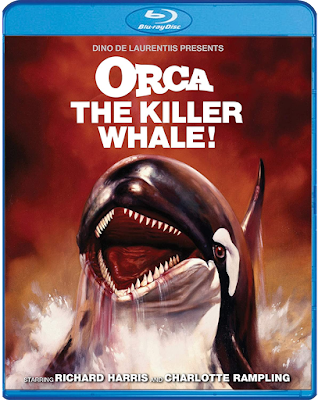 PREPARE TO BE TRAUMATIZED ALL OVER AGAIN WHEN YOU REVISIT ONE OF CINEMA'S GREATEST REVENGE TALES!

ORCA: THE KILLER WHALE is often lumped in with the slew of films that followed in JAWS' wake, and unfairly so because it has more in common with DEATH WISH than it does with Spielberg's eternal classic. ORCA has previously been released on (Region Free) Blu-ray by Umbrella Entertainment (read my review of that release HERE), so I'm guessing that this Scream Factory disc is basically a carbon copy as the only thing missing is the short 5-minute chat with Martha De Laurentiis. If you've been pining to revisit the dreaded "Orcabortion" scene in HD, well now is certainly the time to upgrade Vault Dwellers!

Synopsis: Sleek, intelligent, beautiful ... and hell-bent on revenge. Producer Dino De Laurentiis (KING KONG, RAGTIME) and director Michael Anderson (AROUND THE WORLD IN 80 DAYS, LOGAN'S RUN) join forces to present the rousing action-adventure tale of ORCA: THE KILLER WHALE. It's the story of one powerful being against another: a strong, determined fisherman by the name of Captain Nolan (Richard Harris - UNFORGIVEN) versus an equally determined killer whale.

When the giant whale's pregnant mate is maimed and killed by Nolan, the whale seeks vengeance: smashing boats, attacking a seacoast village, and eventually luring his human adversaries to a final confrontation in the marine creature's own arctic turf. Charlotte Rampling, Will Sampson, and Bo Derek (in her feature film debut) also star in this seafaring epic brimming with nail-biting suspense and spectacular special effects!

Extras:
Scream Factory's Blu-ray of ORCA: THE KILLER WHALE is now available wherever Blu-ray discs are sold and should cost between $23 - $26! Get yourself a copy now from AMAZON, BULL MOOSE, DIABOLIK DVD, or directly from SHOUT! FACTORY.