While a tad light on the Horror, Cult, and Exploitation titles, Umbrella has a really solid lineup of films for December! Of particular interest are the Dino de Laurentiis-produced ORCA (which boasts one of the most disturbing scenes in cinematic history!), the World War II-era fantasy-adventure THE LAND THAT TIME FORGOT, and the (in my opinion) criminally underseen CANNIBAL APOCALYPSE (aka INVASION OF THE HEADHUNTERS), starring John Saxon! For full details on these titles (and a list of Umbrella's other releases) continue onward! 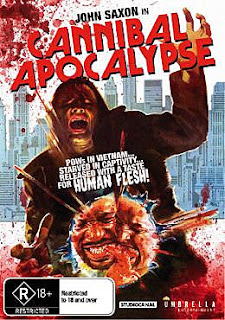 Synopsis: The horrors of war take on a whole new meaning for Vietnam vet Norman Hopper (John Saxon, ENTER THE DRAGON), whose quiet domestic life in Atlanta is shattered by the return of Charlie Bukowski, a combat buddy who dredges up terrifying flashbacks of flesh eating and bloodshed in the war-torn jungles.

Now on the run from the law after taking a bit out of an unwilling victim, Charlie begs Norman to help him get out of town with another fellow veteran, Tom. Soon the ragtag team of cannibals are fighting for their lives, spreading a deadly contagion through the city before heading into the sewers for a gut-wrenching climax you won't soon forget! 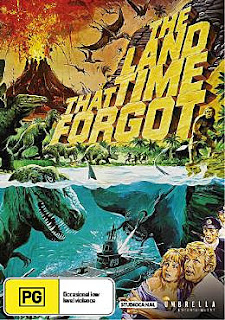 Synopsis: Prepare for a trip into the unknown with a screen epic packed with monsters and thrills! Bowen Tyler (Doug McClure, HUMANOIDS FROM THE DEEP, AT THE EARTH'S CORE) is among a small group of survivors taken in by a German submarine after it sunk their ship. The castaways end up marooned on a mysterious uncharted island, which is inhabited by giant carnivorous creatures.

In order to stay alive, they're pitted to the death against deadly dinosaurs, fearsome sea monsters, soaring pterodactyls, and marauding tribes of primitive humans. Will they escape their prehistoric prison, or will they become THE PEOPLE THAT TIME FORGOT?!

Note: This title will also be available on DVD!


CLICK HERE to get yourself a copy of THE LAND THAT TIME FORGOT on Blu-ray! CLICK HERE if you'd rather own it on DVD! 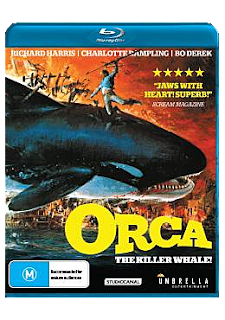 Synopsis: Captain Nolan (Oscar nominee Richard Harris, HARRY POTTER AND THE PHILOSOPHER'S STONE) is a man of the sea. Brave and headstrong, he is a fisherman who takes up the fight of his life against one of nature’s most fearsome creatures – the killer whale.

Orca seeks to avenge the death of his pregnant mate, left murdered in blood red waters. Rising from the ocean, leaving behind it a wake of destruction and mayhem, the deadly marine creature lures his human adversaries to a match of wits and survival in the chilly arctic waters.

CLICK HERE now to order your copy of ORCA on Blu-ray!


Also available on December 6th from UMBRELLA ENTERTAINMENT:
As always, all of the titles listed above are REGION FREE and exclusively available from Umbrella Entertainment's website!

Posted by The Vault Master at 1:50 AM