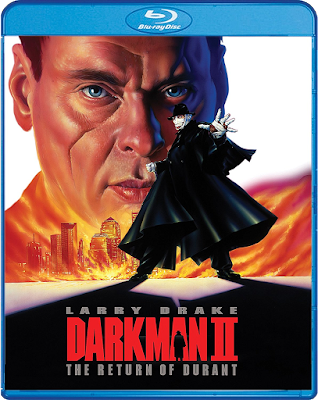 THE OFT-FORGOTTEN "DARKMAN" SEQUELS ARE NOW AVAILABLE ON BLU-RAY, COURTESY OF SCREAM FACTORY!

I really enjoy DARKMAN, and was super excited when I discovered that there were two direct-to-video sequels back in 2007. And then I watched them... and kind of forgot about them again. But now they're back and it's time to revisit the continued adventures of DARKMAN!

Synopsis: The crime-fighting master of disguises returns in this action-packed sequel to the hit motion picture. Arnold Vosloo (THE MUMMY, G.I. JOE: THE RISE OF COBRA) stars as Darkman, and Larry Drake (DR. GIGGLES) reprises his role as the sadistic villain Robert G. Durant.

Co-starring Kim Delaney (NYPD Blue), DARKMAN II: THE RETURN OF DURANT is filled with nonstop action, suspense and special effects which will leave you on the edge of your seat from start to finish.

Extras:
DARKMAN II: THE RETURN OF DURANT is now available wherever discs are sold! You can get your copy now at AMAZON, BULLMOOSE, DIABOLIK DVD, or directly from SHOUT! FACTORY. 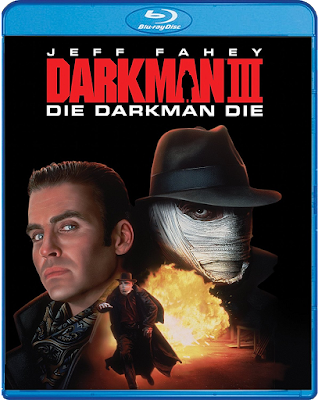 Synopsis: DARKMAN IS BACK IN A NEW ACTION-PACKED SEQUEL! Arnold Vosloo returns as Dr. Peyton Westlake, a.k.a. Darkman, the crime-fighting master of disguises. In this action-packed adventure, Westlake matches wits with underworld drug-dealing villain Peter Rooker (Jeff Fahey), who will do anything to unmask the secret of Westlake's superhuman strength.

Agreeing to an experimental operation on his ravaged body, Westlake is flung into a vicious game of survival for himself, his priceless research and the lives of two innocent people. One false move and he will be locked into darkness forever.

Extras:
You can get DARKMAN III: DIE DARKMAN DIE now on Blu-ray from AMAZON, BULLMOOSE, DIABOLIK DVD, or SHOUT! FACTORY.