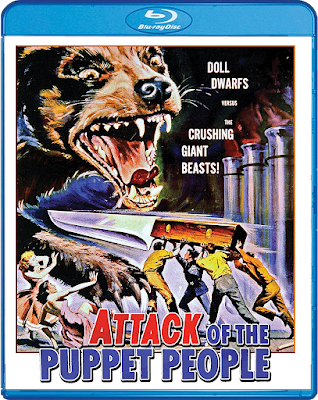 ON NOVEMBER 14TH, GROW YOUR MOVIE COLLECTION WITH "ATTACK OF THE PUPPET PEOPLE" AND "THE INCREDIBLE SHRINKING WOMAN!"

Shout! Factory and its sister labels have been releasing a lot of cool stuff lately, and these two titles are no exception. I've never seen either film before, but I look forward to scoping out the lilliputian adventures contained within in these two new Blu-ray releases!

Synopsis: "She's a living doll!" changes from a flattering expression to a terrifying reality when a certifiably deranged maniac creates a shocking device that shrinks people to foot-high figurines!

Mr. Franz is a kindly, old, silver-haired doll-maker ... who turns people into living puppets! He then forces his human re-inventions to put on parties and sing to him! But one day, tired of being toyed with, the puppets launch an attack, and suddenly Mr. Franz finds he'd better stop playing – and start praying – because the miniature moppets are hell-bent on revenge!

Extras:
ATTACK OF THE PUPPET PEOPLE is due out on Tuesday, November 14th, and is available to order from AMAZON, BULLMOOSE, DIABOLIK DVD, and SHOUT! FACTORY. 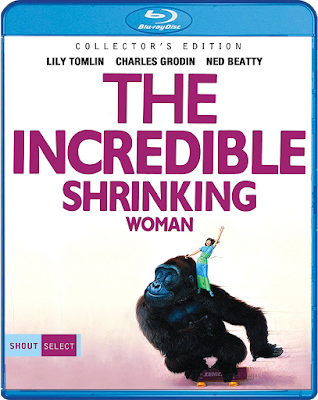 Synopsis: She was an ordinary housewife who gave so much … and got so little.

Comedy legend Lily Tomlin stars in the effervescent 1981 comedy THE INCREDIBLE SHRINKING WOMAN. Exposed to a heady mix of household chemicals, Pat Kramer (Tomlin) contracts a strange side effect: She begins to shrink!

Baffling doctors, Pat's diminishing size starts to really bring her down … until her story captures the hearts of the American people and the attention of a sinister group of scientists bent on world domination. Getting out of this predicament while still taking care of her family will be no small feat!

Extras:
Wow! That's a whole lotta love for a movie I think many of us totally forgot about! Shout Select's Collector's Edition of THE INCREDIBLE SHRINKING WOMAN will be available at retailers on Tuesday, November 14th, including AMAZON, BULLMOOSE, and SHOUT! FACTORY.