Meet the Amazing MR. NO LEGS Face to Face on Blu-ray! 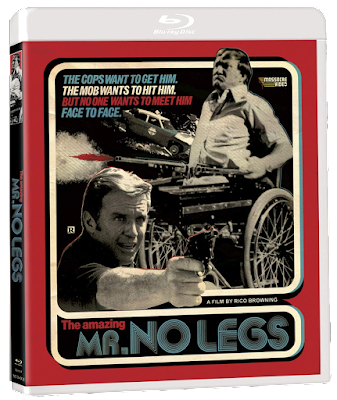 Ricou Browning's claim to fame was being the Gill Man in all of the aquatic scenes in the CREATURE FROM THE BLACK LAGOON trilogy, as well as being the creator of FLIPPER! But what many do not know is that Ricou (who directed family-fare like SALTY and the Gentle Ben TV Series) also directed a little film called MR. NO LEGS. I first heard about this movie from Hudson Horror Show frontman Chris Alo years ago, and listened in disbelief as he told me all about it. And now, thanks to the efforts of Massacre Video, this long lost gem is can continue to build up a cult following!

Synopsis: Double amputee, Mr. No Legs, may not seem much of a threat at first, but cross him and you’ll see why he’s Florida’s ruthless drug kingpin D’Angelo’s deadliest enforcer. With his unique martial arts mastery and shotgun-wielding wheelchair, Mr. No Legs is virtually unstoppable. But when a henchman kills the sister of a straight-shooting cop, D’Angelo’s whole enterprise may come undone, and threaten to bring No Legs down with it. 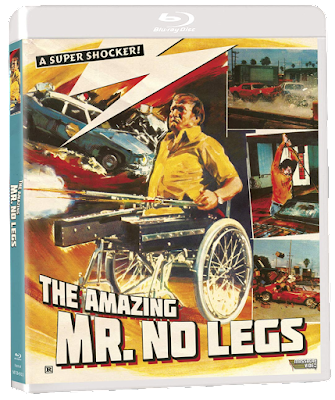 Massacre Video proudly presents this wild, wheeled 70s crime story for the first time in HD, with a brand new 2K restoration from the only known 35mm film elements in existence!

Extras:
Rescued from obscurity by the folks at Massacre Video, MR. NO LEGS (previously released in a now out of print Limited Edition Blu) is now ready to be rediscovered in this wonderful release that contains two cuts of the film, reversible cover art, and "other surprises." MR. NO LEGS should cost between $20 - $24 and is easily obtainable from AMAZON, BULL MOOSE, DIABOLIK DVD, and directly from MASSACRE VIDEO!