The Object is to Stay Alive - DEATH GAME Makes its Blu-ray Debut on November 15th! 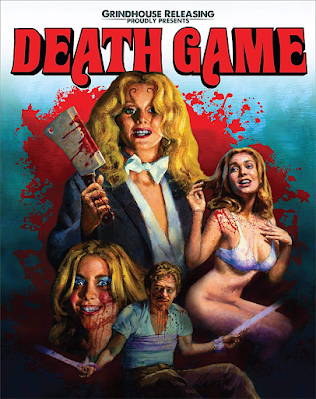 GRINDHOUSE RELEASING GIVES PETER TRAYNOR'S "DEATH GAME" A SPECTACULAR 2-DISC BLU-RAY RELEASE!
My sole experience of watching DEATH GAME was back in November 2021 at Exhumed Films' 24-Hour Horrorthon, where they took a break from running 35mm prints to showcase Grindhouse Releasing's gorgeous 4K restoration of the film! While I didn't become an instantaneous fan of the movie, I kind of fell in love with Colleen Camp and Sandra Locke as the two totally unhinged femme fatales that throw themselves at an unwitting victim, then turn on him after their carnal needs are satiated.

Having purchased several of Grindhouse Releasing's previous titles (CANNIBAL HOLOCAUST and PIECES), I have to admit that even though this particular film isn't a favorite of mine, I'm actually considering picking up a copy for the transfer and extras alone! While I try to figure out if I want to add this 2-disc set to my collection, let's take a closer look to help you decide if DEATH GAME is right for you, shall we?!

Synopsis: Grindhouse Releasing is proud to present the ultimate 1970s psychological thriller! John Cassavetes veteran Seymour Cassel stars as George Manning, a family man whose perfect life is turned into a nightmare of sex and torture when he allows himself to be seduced by two nubile young strangers (Sondra Locke and Colleen Camp) who show up at his door on a rainy night. Considered lost for many decades, DEATH GAME is being presented for for the first time on home video in its original aspect ratio, meticulously restored in 4K from the original camera negative! 
Extras:
So just to reiterate what you get with this release: A new 4K transfer of a long-lost home invasion thriller, hours of new special features, fancy collectible packaging, and a second movie! Sounds like it's worth picking up to me! Grindhouse Releasing's highly-anticipated release of DEATH GAME arrives on Tuesday, November 15th and should cost somewhere between $30 - $35! Order your copy immediately (or forever be filled with regret) from AMAZON, BULL MOOSE, DIABOLIK DVD, or directly from GRINDHOUSE RELEASING!

As an added bonus, if you are a fan of this movie, Grindhouse Releasing is also selling an exclusive DEATH GAME Logo t-shirt on their site for $20! CLICK HERE to get yourself one!

Posted by The Vault Master at 3:28 PM