Go Bigfoot Hunting for the CREATURE FROM BLACK LAKE - Coming to Blu-ray Disc on December 13th! 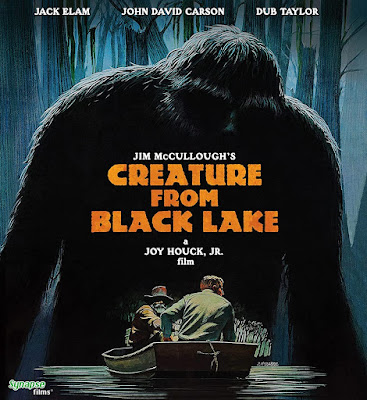 Made in the wake of Charles B. Pierce's THE LEGEND OF BOGGY CREEK (and several other films trying to capitalize on its success), Joy Houck Jr.'s entry into the Bigfoot movie sub-genre was one of the better made docudramas of that era. Once a staple of late night television, CREATURE FROM BLACK LAKE would eventually make its way to VHS, but wouldn't see the light of day again until an official DVD release back in 2005. And now, thanks to the efforts of the folks at Synapse Films, this forgotten tale of two intrepid researchers scouring the swamps of Louisiana for proof of a legendary "missing link" is back and better than ever, boasting a 4K restoration and fantastic new extras! Let's take a closer look at this upcoming release, shall we?

Synopsis: There's a hairy humanoid beast lurking in the Louisiana swamps, but only trapper Joe Canton (Jack Elam, ONCE UPON A TIME IN THE WEST) has seen it and lived to tell the tale, and the other residents of Oil City, Louisiana don't talk about it. But that's not about to stop intrepid grad students Pahoo (Dennis Fimple, HOUSE OF 1000 CORPSES) and Rives (John David Carson, EMPIRE OF THE ANTS), who are determined to track down the Bigfoot-like creature. Defying local sheriff Billy Carter (Bill Thurman, THE LAST PICTURE SHOW), the duo trek deep into the wilds of Black Lake, and a series of frightening encounters make it clear the monster is no mere legend.

Following in the (big) footsteps of THE LEGEND OF BOGGY CREEK and similar docudramas, 1976's CREATURE FROM BLACK LAKE is a fictional Sasquatch saga, albeit one inspired by real reports. With a colorful cast, also including Dub Taylor (THE WILD BUNCH), and plenty of rural atmosphere courtesy of cinematographer Dean Cundey (HALLOWEEN, THE THING, JURASSIC PARK), scripter Jim McCullough Jr.—who also co-stars—and director Joy Houck Jr. bring touches of humor and humanity that complement the mystery of the monster, and the terror of its attacks.
Disc Specs:
Not Rated | Color | 95 minutes | Region Free
Video - 1080p Widescreen (2.35:1)
Audio - English Dolby TrueHD 2.0 Mono

Though I wouldn't be surprised if a 4K Ultra HD Blu-ray release pops up later on down the road, for the time being, this release is guaranteed to be the very best that CREATURE FROM BLACK LAKE has ever looked or sounded! Coupled with the Dean Cundey featurette, plus the audio commentary by Gingold and Poggiali, this is the most love the film has been shown since it was shot, edited, and released theatrically over four decades ago!

If you're a Bigfoot film enthusiast, then make sure to pre-order your copy right now (for approximately $20) from AMAZON or BULLMOOSE! However, if you're the type of movie collector that prefers a slipcover with their disc, then hurry and grab a limited edition copy of CREATURE FROM BLACK LAKE right this minute (for approx. $30) from DIABOLIK DVD or directly from SYNAPSE FILMS!

Posted by The Vault Master at 2:24 AM