When There's No More Room in Hell, the Dead Will Walk the Earth - Zach Snyder's DAWN OF THE DEAD comes to 4K UHD in early 2023! 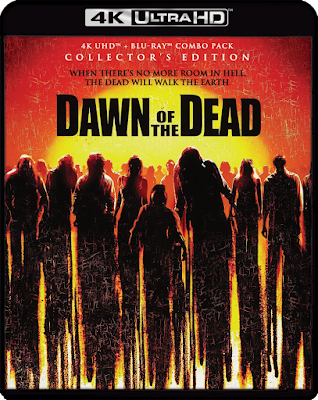 SCREAM FACTORY CONTINUES THEIR MARATHON OF DOUBLE DIPS WITH THE 4K RELEASE OF THE "DAWN OF THE DEAD" REMAKE!

I keep saying it, and others seem to agree - Scream Factory is the second coming of Anchor Bay! (Ha!) Though they have continued to release surprise titles (most recently THE HOT BOX and THE WARRIOR AND THE SORCERESS), cool Horror collectibles, and modern fright favorites to Blu-ray and 4K disc (e.g. FREAKY), a huge part of Shout!/Scream's current business model is getting collectors to use their hard-earned cash to buy the same titles again and again! I mean it was inevitable that Scream Factory would eventually embrace the 4K UHD format, but damn, they could at least sweeten the deal by including some new extras along with the new transfer, right?!

That all being said, let's take a look at Scream's upcoming 4K release of the James Gunn-penned/Zach Snyder-directed DAWN OF THE DEAD remake that is way better than it has any right to be! If you don't already own it, then you may want to hold out for this release. And if you do already own it.... you are probably breaking into a cold sweat right now and starting the process of talking yourself into ordering the 4K, even though you just got the Collector's Edition Blu-ray during the last Shocktober sale....

From visionary filmmaker Zack Snyder (300, ARMY OF THE DEAD, JUSTICE LEAGUE), comes a nightmarish vision where society is endangered by a mysterious virus that turns people into mindless, flesh-eating zombies, and a handful of survivors must wage a desperate, last-stand battle to stay alive ... and human!

The 4K Collector's Edition of DAWN OF THE DEAD is tentatively scheduled for release on Tuesday, January 31st of next year, and should cost between $30 - $36! Again, if you do not already own this movie, I'd recommend taking the plunge on this 3-disc set since it is, more or less, (currently) the definitive release for this film. For those of you who already own the previous Blu-ray release, well... the choice to upgrade is entirely up to you! Once your mind is made up, you may pre-order yourself a copy right this very minute at AMAZON, BULL MOOSE, DIABOLIK DVD, or directly from SHOUT! FACTORY, which will net you an exclusive poster (while supplies last)!

Posted by The Vault Master at 2:25 AM