Bob Clark's OTHER Christmas Classic coming out in deluxe Collector's Edition on 12/13! 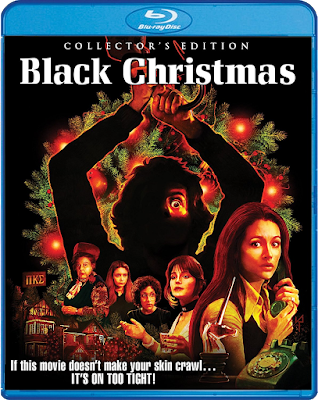 ON DECEMBER 13TH, SCREAM FACTORY DELIVERS THEIR DEFINITIVE COLLECTOR'S EDITION OF "BLACK CHRISTMAS" AS THE ULTIMATE STOCKING-STUFFER FOR HORROR FANS!

Growing up, I was an unabashed fan of Bob Clark's A CHRISTMAS STORY. However, as the years have passed, I'm finding myself avoiding that particular movie during the holiday season, and instead enjoying Clark's proto-slasher film!

And now, once again, Scream Factory delivers the goods with their new Blu-ray of this Holiday Horror Classic! Boasting a much-celebrated 2K transfer and a slew of extras, this is definitely something that will be cherished by any Horror fan that receives it as a gift this holiday season!

Synopsis: The college town of Bedford is receiving an unwelcome guest this Christmas. As the residents of sorority house Pi Kappa Sigma prepare for the festive season, a stranger begins to stalk the house.

A series of obscene phone calls start to plague the residents of the sorority and it becomes clear that a psychopath is homing in on the sisters with dubious intentions. And though the police try to trace the calls, they discover that nothing is as it seems during this Black Christmas.

"Stuffed with extremely tense moments, chilling cinematography, amazing characters and long-lasting dread… [this] genuine classic is completely deserving of every bit of respect and admiration it's picked up over the last 40 years" (addictedtohorormovie.com).

Extras:
DISC 1
DISC 2
Scream Factory's BLACK CHRISTMAS: COLLECTOR'S EDITION will be available everywhere on Tuesday, December 13, 2016! There have been some complaints about the 2.0 Mono track on the first disc (as addressed in this review) - apparently there were issues with the optical audio track that Scream Factory utilized when producing this release, and I guess they did the best they could with it.

While that is disappointing, this is still a stellar Blu-ray that boasts two different transfers, numerous other audio options, and a huge number of extras. Honestly I don't see how anyone could justify skipping this release because of a "hissy" Mono track, but then again, I'm not a hardcore BLACK CHRISTMAS purist. If you haven't been scared off, you can grab this new Scream Factory title now at Amazon, Diabolik DVD, BullMoose.com, or directly from Shout! Factory's online store!