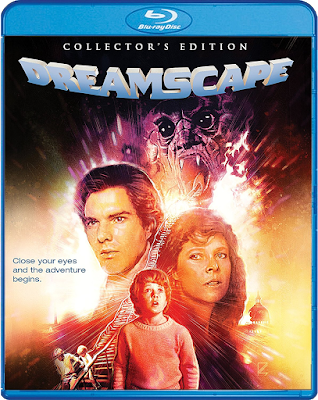 FIND OUT IF DENNIS QUAID IS THE MAN OF YOUR DREAMS ON DECEMBER 13TH, WITH SCREAM FACTORY'S "DREAMSCAPE!"

I love DREAMSCAPE! It's a super cool movie that has an interesting premise (think INNERSPACE, but more cerebral and fantastical), a great cast, and some awesome practical f/x! If you're a fan, you NEED this disc. If you've never seen this movie, do yourself a favor and give it a whirl!

Synopsis: Alex Gardner (Dennis Quaid) is a man with an incredible psychic gift… but for years has used it solely for personal gain. Reuniting with his old mentor, Dr. Novotny (Max von Sydow), Gardner joins a government project in which he learns to channel his abilities in order to enter peoples' subconscious through their dreams. As his powers grow, the young psychic soon finds himself in a living nightmare of conspiracy and murder… and the only way out is to go back in.

A sleeper hit on its initial release, Dreamscape's reputation as a classic of '80s genre entertainment has only grown over the years. From its impressive cast – including Christopher Plummer, Kate Capshaw, Eddie Albert, David Patrick Kelly, and George Wendt – to behind-the-camera talent such as director Joseph Ruben (THE STEPFATHER) and co-writer Chuck Russell (A NIGHTMARE ON ELM ST. 3: DREAM WARRIORS, 1988's THE BLOB), Dreamscape is a rousing mix of science fiction, adventure, and horror beyond your wildest imagination.

Extras:
DREAMSCAPE: COLLECTOR'S EDITION comes out on Tuesday, December 13th! I highly recommend this film, and feel that this is the best way to watch it! New 2K transfer, lots of new extras, but sadly, this is NOT the uncut version that briefly features the bewbs of actress Kate Capshaw. You can order it now from Amazon, Diabolik DVD, BullMoose.com, or directly from Shout! Factory (which will also net you a free 18 x 24 poster if you order soon!). I don't know about the rest of you, but I'm definitely getting my paws on this one... after the holidays are over!