After unveiling their "Beyond Genres" label last month, it would seem that Umbrella would have a tough time topping the RE-ANIMATOR films (and Region Free Blu-ray of Don Coscarelli's THE BEASTMASTER). However it seems they have done just that with their latest batch of new titles that were released on July 4th! (Yeah... I'm a bit behind.)

Stuart Gordon's DAGON is the latest addition to Umbrella's Beyond Genres series and is based upon the writings of H.P. Lovecraft. (Primarily Dagon and The Shadow Over Innsmouth.) Also available are ESCAPE FROM ABSOLON (aka NO ESCAPE to us Yanks), THE ENDLESS (a trippy "Lovecraftian" Sci-Fi/Horror film), and the modern fantasy tale I KILL GIANTS.

To learn more about these new releases, and see the remainder of Umbrella's new DVD & Blu-ray releases for the month of July, continue reading!

ANNOUNCEMENTS:
* After months of delays it is finally happening: RAZORBACK is finally coming to Blu-ray on August 1st with a new 4K transfer and loads of new extras! This one is a definite must-own Vault Dwellers! Also out on the same day: Universal's classic creature-feature TARANTULA!

* Umbrella's September roster is full of cult classics and new films you'll want to check out! Here's what's coming on 09/05: CARGO, HEATHERS, THE IMMORTAL WARS, SPIRIT OF THE AIR - GREMLINS OF THE CLOUDS, and TO CATCH A KILLER! 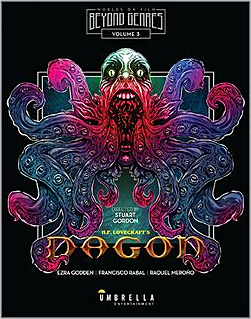 Synopsis: Based on the short story by the undisputed master of the macabre, H. P. Lovecraft. A boating accident off the coast of Spain sends Paul and his girlfriend to the dilapidated fishing village of Imboca looking for help. As night falls people start to disappear and things not quite human start appearing.

Paul finds himself pursued by the entire town and discovers Imboca's  dark secret whilst running for his life... Freakish half-human creatures populate the town, and they pray to Dagon, a monstrous God of the sea. All outsiders are sacrificed, the men are skinned alive and the women offered as unwilling brides to bear Dagon's unholy children.

ORDER DAGON NOW EXCLUSIVELY FROM
UMBRELLA ENTERTAINMENT!
(NOTE: If you do not have a region free Blu-ray player, CLICK HERE to order the upcoming Vestron Collector's Series' release!) 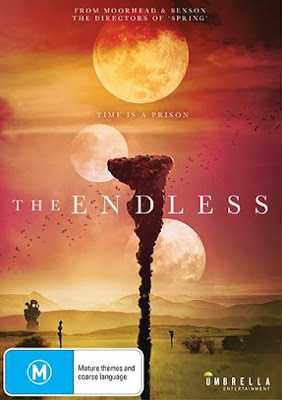 Synopsis: Living in poverty in a shared studio apartment in Los Angeles, two brothers (Justin and Aaron) receive a mysterious videotape in a box that seems to have been shipped through a hundred countries before arriving on their doorstep. On it, a Heaven’s Gate-esque cult member talks about an impending “Ascension.” We learn that the brothers were raised in this cult, and fled from it a decade ago because Justin pulled Aaron out when he became aware of an impending mass suicide.

But this tape seems to say otherwise their old family is alive and well, which opens a crack in the brothers’ relationship: Why did Justin pull Aaron away from the only family he’s ever known, lie about their mass suicide, and have him live this destitute life? On Aaron’s insistence, they go back to their homestead in order to get some closure. But when they arrive, they discover that the “cult” might not really be a cult at all, and they’re not certain just how welcome back they are. There seems to be a dark truth to the commune’s otherworldly beliefs that suggest the laws of the natural world may be very different than we assume, which propels THE ENDLESS into a Lovecraftian tale about brotherhood, giving up your personal autonomy, and history’s weird, malevolent tendency to repeat itself.

ORDER THE ENDLESS FROM
UMBRELLA ENTERTAINMENT OR AMAZON.COM! 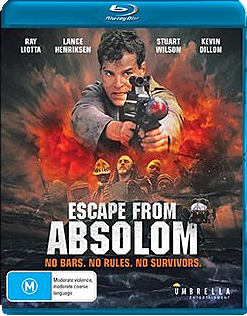 Synopsis: In the year 2022, society has created the ultimate solution for it's most ruthless criminals. Absolom, a remote jungle island where prisoners are abandoned and left to die. For most, Absolom means no escape, no hope and virtually no chance of survival.

But for convicted Marine Captain, John Robbins (Ray Liotta - SIN CITY: A DAME TO KILL FOR), the ultimate prison becomes the ultimate challenge - to clear his name, he'll have to first escape from Absolom...

ORDER ESCAPE FROM ABSOLOM FROM
UMBRELLA ENTERTAINMENT OR AMAZON.COM! 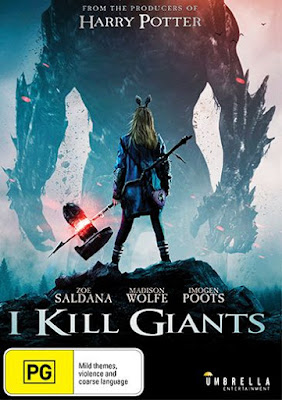 Synopsis: Barbara Thorson (Madison Wolfe - THE CONJURING 2) is a teenage girl who chooses to escape the realities of school and a drab family life by retreating into her magical world of Titans and Giants.

With the help of her new friend Sophia (Sydney Wade) and her school therapist (Zoe Saldana - GUARDIANS OF THE GALAXY), Barbara will learn to battle her Giants and face her fears – tackling the mean bullies at school, her sister (Imogen Poots) and her difficult home life and eventually her biggest dread of the unknown.
I KILL GIANTS is an adaptation of Joe Kelly and Ken Niimura's Man of Action/Image Comics internationally acclaimed graphic novel is directed by Academy Award-winning director Anders Walter (Best short film. Helium).

ORDER I KILL GIANTS FROM
UMBRELLA ENTERTAINMENT OR AMAZON.COM!

As usual, all of the DVDs and mentioned in this post can be ordered directly from UMBRELLA ENTERTAINMENT, and are (typically) Region Free!