PIRANHA II: THE SPAWNING Flaps Its Way to Blu-ray on July 31st! 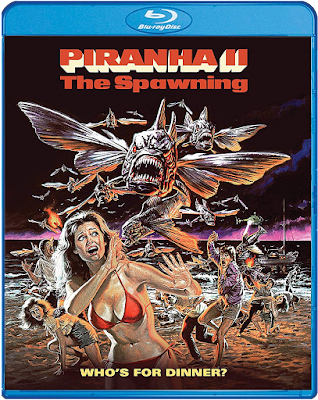 The 80s were a magical time Vault Dwellers. Anyone with a handful of cash, a camera, and a dream (and maybe some semblance of a plot) could shoot a movie. This led to the creation of some of the craziest films ever committed to celluloid. Nothing was off-limits and nothing was out of the question. The boundaries of special effects, suspension of an audience's disbelief, and good taste were all pushed to their very limits!

Which brings us to PIRANHA II: THE SPAWNING. Released in 1981, this bizarre sequel to Joe Dante's original classic was partially directed by James Cameron, scored by Stelvio Cipriani, and features Lance Henriksen and a legion of flying killer fish! While its production history is ultimately more interesting than the film itself, PIRANHA II is still a fun reminder that there was once an era in cinematic history where just about ANYTHING could get bankrolled.

Synopsis: It may seem like paradise, but just off shore, a new brand of terror has been unleashed ... While investigating the mysterious death of a diver, scuba instructor Anne Kimbrough (Tricia O'Neil, ARE YOU IN THE HOUSE ALONE?) makes a horrific discovery: mutated piranhas, with wings that enable them to fly, are responsible for the death.


As the body count rises, Anne desperately tries to convince the manager of the resort to call off the annual fish fry on the beach, but he's determined to give his guests the ultimate feeding frenzy. This exciting sequel to Joe Dante's original Piranha also stars Lance Henriksen (ALIENS, THE TERMINATOR, NEAR DARK) and is the directorial debut of James Cameron (AVATAR, THE TERMINATOR, ALIENS).

Extras:
Scream Factory's Blu-ray release of PIRANHA II: THE SPAWNING will be released on Tuesday, July 31st and should cost between $20 - $24! Order yourself a copy now from AMAZON, BULLMOOSE, DIABOLIK DVD, or directly from SHOUT! FACTORY.


Also, while you may be celebrating the fact that you can now complete your PIRANHA movie collection, I must point out that you're still a movie short. In 1995, Roger Corman produced a forgotten remake of PIRANHA starring William Katt. I guess we'll just have to wait and see if Scream Factory eventually releases that to Blu-ray as well!