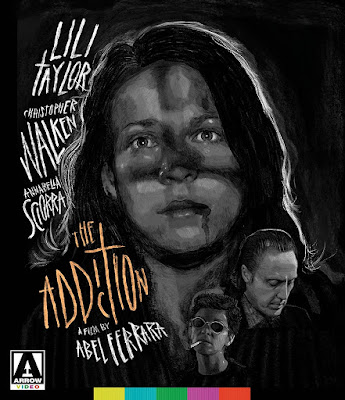 "THE ADDICTION" AND "VIGIL" NOW AVAILABLE ON BLU-RAY COURTESY OF ARROW VIDEO!

Truth be told Vault Dwellers, I am not familiar with either of Arrow's newest titles, but they sound pretty interesting! THE ADDICTION was directed by Abel Ferrara (MS.45, THE DRILLER KILLER) and offers up a different take on vampirism, while VIGIL is the directorial debut of Vincent Ward (WHAT DREAMS MAY COME) and tells the tale of a young girl who tries to protect her family from a mysterious stranger that just may be the Devil himself. Sound enticing? Then read on fellow Blu-ray collectors!

Synopsis: The mid-nineties were a fertile period for the vampire movie. Big-name stars such as Tom Cruise (INTERVIEW WITH THE VAMPIRE) and Eddie Murphy (VAMPIRE IN BROOKLYN) flocked to genre, as did high-caliber filmmakers like Francis Ford Coppola (BRAM STOKER'S DRACULA), veterans Wes Craven (VAMPIRE IN BROOKLYN) and John Landis  (INNOCENT BLOOD), independents Michael Almereyda (NADJA) and Jeffrey Arsenault (NIGHT OWL), and up-and-comers Quentin Tarantino (FROM DUSK TILL DAWN) and Guillermo del Toro (CRONOS). Amid the fangs and crucifixes, Abel Ferrara reunited with his KING OF NEW YORK star Christopher Walken for THE ADDICTION, a distinctly personal take on creatures of the night.

Philosophy student Kathleen (Lili Taylor, THE CONJURING) is dragged into an alleyway on her way home from class by Casanova (Annabella Sciorra, THE HAND THAT ROCKS THE CRADLE) and bitten on the neck. She quickly falls ill but realizes this isn't any ordinary disease when she develops an aversion to daylight and a thirst for human blood...


Having made a big-budget foray into science fiction two years earlier with BODY SNATCHERS, Ferrara's approach to the vampire movie is in a lower key. Shot on the streets of New York, like so many of his major works (including BAD LIEUTENANT) and beautifully filmed in black and white, THE ADDICTION sees the filmmaker on his own terms and at his very best: raw, shocking, intense, intelligent, masterful.

Extras:
THE ADDICTION is currently available wherever Blu-ray discs are sold and should cost between $24 - $28. You can get yourself a copy now from AMAZON, BULLMOOSE, or DIABOLIK DVD! 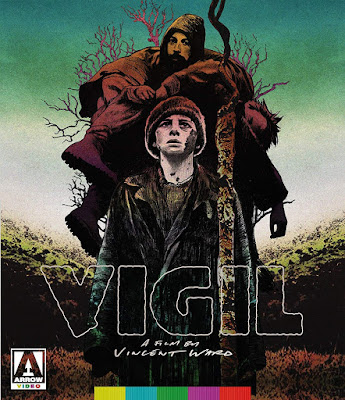 Synopsis: Vincent Ward once described as the "Antipodean Werner Herzog" made his feature debut with VIGIL, heralding his status as one of New Zealand's most distinctive filmmaking talents and paving the way for such equally remarkable and unclassifiable efforts as THE NAVIATOR: A MEDIEVAL ODYSSEY and MAP OF THE HUMAN HEART.

A stranger appears in a remote New Zealand farmland at the exact time a farmer accidentally falls to his death. The mysterious outsider grows close to some of the dead man's family, to the point where he and the widow become lovers. But her eleven-year-old daughter, Toss, struggling to come to terms with the death of her father as well as her impending womanhood, believes the intruder to be the devil and sets about protecting her family and their homestead.

Propelled by Fiona Kay's outstanding performance as Toss, she would earn a standing ovation when VIGIL screened at the 1984 Cannes Film Festival the first time ever that a New Zealand feature played in the main competition.

Extras:
VIGIL is priced between $26 - $29 and can easily be obtained through AMAZON, BULLMOOSE, and DIABOLIK DVD!