AGFA and Something Weird Unveil Their GODMONSTER OF INDIAN FLATS Blu-ray on July 10th! 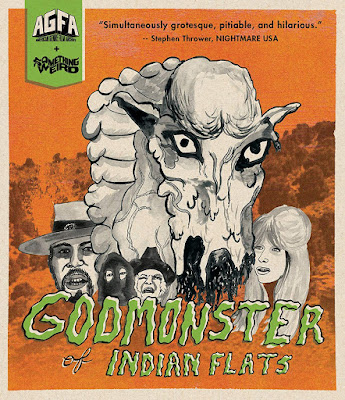 "GODMONSTER OF INDIAN FLATS" EXITS OBSCURITY AND ARRIVES ON BLU-RAY WITH A 4K TRANSFER AND NEW EXTRAS!

In the long list of things I never thought I'd hear myself say.... GODMONSTER OF INDIAN FLATS hits Blu-ray tomorrow! Holy. Hell. I first discovered this cult oddity years ago when I picked up a cheap copy of Something Weird's DVD release of the film. To this day I'm not entirely sure how I feel about this tale of mutant sheep on the loose near a town that is forcibly trapped in the past by its mad mayor. Guess it's time to revisit it!

Synopsis: Gaseous vapors from an ancient mine cause the birth of a huge squealing embryo that is taken to the laboratory of a local mad doctor where it grows into a monstrous 8-foot mutant sheep. Got that? An 8-Foot Mutant Sheep! Meanwhile, the racist mayor of a historic Wild West tourist town attempts to thwart the efforts of a black man buying real estate by attempting to lynch him! Plans go awry, however, when the giant, wool-covered Lamb from Hell escapes from the doctor's lab and starts waddling across the countryside.

Spewing an orange phosphorous gas, the semi-prehistoric GODMONSTER OF INDIAN FLATS terrifies the population, blows up a gas station, and even "dances" with a deranged hippie chick until it's lassoed by cowboys. The mayor then startles everyone by putting "the damaged mongoloid beast" on display as "The 8th Wonder Of The World!"


Starring cult favorite Stuart Lancaster (MANTIS IN LACE) as the malignant Mayor Silverdale, filmed in Virginia City, Nevada (an actual U.S. national historical monument!), and mixing science fiction, satire, and politics, the ultra-obscure GODMONSTER OF INDIAN FLATS is easily one of the weirdest, wackiest, oddballest monster movies ever made!

Extras:
GODMONSTER OF INDIAN FLATS hits retailers on Tuesday, July 10th and should cost you $20! Get yourself a copy now from AMAZON, BULLMOOSE, or DIABOLIK DVD!