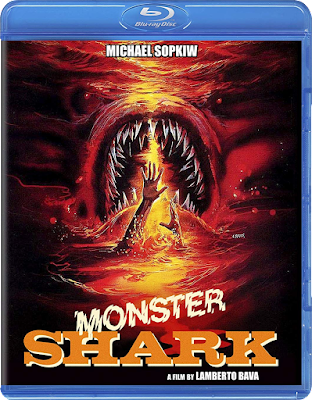 LAMBERTO BAVA'S CLASSIC CREATURE FEATURE FINALLY GETS THE LOVE IT DESERVES THANKS TO CODE RED!

For years Lamberto Bava's MONSTER SHARK was only available to us via Mystery Science Theater 3000's hysterical episode under its alternate title of DEVILFISH. But now Code Red has unleashed the original "Sharktopus" to Blu-ray with a new HD transfer and I couldn't be happier!

Synopsis: The ocean depths unleash a bloodthirsty monstrosity in this cult classic monster favorite from Italy! A marine biologist (Michael Sopkiw, BLASTFIGHTER), a dolphin trainer (Valentine Monnier, 2019: AFTER THE FALL OF NEW YORK), a research scientist, and a local sheriff (Gianni Garko, THE PSYCHIC) try to hunt down a large sea monster, a shark/octopus hybrid, that’s devouring swimmers and fishermen off a south Florida coast.

Also starring William Berger (SABATA) and featuring a score by Fabio Frizzi (THE BEYOND), this aquatic nightmare was directed by Lamberto Bava (DEMONS) and co-written by Luigi Cozzi (STAR CRASH) and Sergio Martino (HANDS OF STEEL) -- and now you can see it bigger and bloodier than ever in a new HD scan!

Extras:
Code Red's MONSTER SHARK Blu-ray is now available wherever Blu-ray discs are sold, and should cost you between $20 - $24. If you're a fan of Italian Horror and/or creature features, you should definitely snag a copy of this flick from AMAZON, BULLMOOSE, or DIABOLIK DVD!