SCREAM FOR HELP Finally Makes Its Triumphant Debut on Blu-ray! 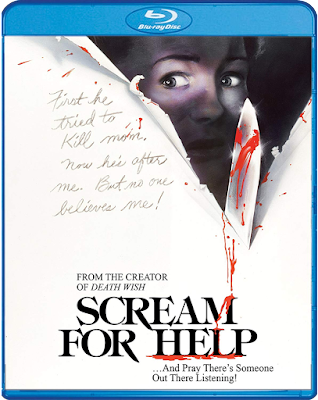 Few announcements shocked and excited me as much as Scream Factory's declaration that they were adding SCREAM FOR HELP to their catalog at this year's San Diego Comic-Con. (This of course, came just several months after we highlighted this bizarre film in our WANTED ON BLU-RAY column so.... I'll take a bit of the credit. Haha!)

I had first experienced this film several years ago during Exhumed Film's 24-Hour Horrorthon in Philadelphia, where SCREAM FOR HELP energized the audience, and instantly became a crowd favorite! This movie is a must buy for yours truly, but if you're still on the fence, read more about it below!

Synopsis: Terror invades an upper-class New York community as 17-year old Christie Cromwell cleverly uncovers her stepfather's horrifying plot to murder her wealthy mother. She's on to him, yet no one will believe her because she's just a kid: smart, imaginative, maybe she's just taken a crazy idea to the limit. Suspense builds when a series of shocking events confirms her worst fears. Alone, afraid and helpless, terrified Christie and her mother are held prisoner in their own home at the mercy of ruthless killers.

Extras:
SCREAM FOR HELP is currently available wherever Blu-ray discs are sold and is going for $24 - $28 at the moment! If you're a fan of this cult classic, or just super curious, I highly recommend you pick up a copy of this movie ASAP from AMAZON, BULLMOOSE, DIABOLIK DVD, or directly from SHOUT! FACTORY.