Mill Creek Entetainment's Double Feature of NIGHTWING and SHADOW OF THE HAWK Comes to Blu-ray on October 16th! 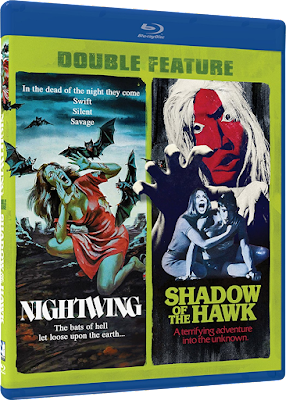 I am so overcome with joy Vault Dwellers! When I saw this double feature Blu-ray pop up for pre-order on Amazon,  there was absolutely NO hesitation when I added it to my cart. Both NIGHTWING and SHADOW OF THE HAWK were both staples of my youth, and I have fond memories of watching them late at night on TNT.

NIGHTWING is a supernatural thriller disguised as a "nature strikes back" flick, and has flocks of vampire bats attacking people in the deserts of New Mexico. SHADOW OF THE HAWK is an adventure tale about Jan-Michael Vincent accepting his role as a medicine man in order to defeat an evil witch! This one has some truly eerie moments, and one particularly memorable scene where a demonic car crashes into an invisible wall! (Such a cool effect!)

I haven't seen any reviews about the film transfers yet, but they have to be better than the VHS-rips I've been watching for the past decade! Regardless, next week I'll be excitedly popping this disc into my Blu-ray player, and taking a trip down memory lane!


SHADOW OF THE HAWK Synopsis: The aging Indian medicine man Old Man Hawk arrives in the city to request help of his grandson Mike, a successful business executive. Old Man Hawk is fighting a sorcerous war with the witch Dsonqua who was executed two hundred years before and is now seeking revenge. Mike, who has no interest in the Indian ways, is reluctantly drawn in to helping.

Extras:
Despite the lack of extras, I can't complain about this release because neither film has been released in HD before, and the cost is pretty darned low. (Between $8 - $15.) Order yourself a copy of this super cool double feature now from AMAZON, BULLMOOSE, DIABOLIK DVD, or directly from MILL CREEK ENTERTAINMENT!