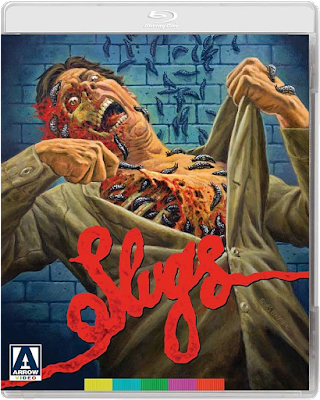 "THEY SLIME. THEY OOZE. THEY KILL!"
ON SEPTEMBER 27TH, "SLUGS" MAKES ITS U.S. BLU-RAY DEBUT, COURTESY OF ARROW VIDEO!

Juan Piquer Simon has made some of my favorite b-flicks: POD PEOPLE, PIECES, THE RIFT, and of course SLUGS! I only have a handful of Arrow Video releases in my collection, and I'm gonna make sure this one ends up alongside them!

The townsfolk of a rural community are dying in strange and gruesome circumstances. Following the trail of horrifically mutilated cadavers, resident health inspector Mike Brady is on the case to piece together the mystery. He soon comes to a terrifying conclusion giant slugs are breeding in the sewers beneath the town, and they're making a meal of the locals!

Based on the novel by acclaimed British horror author Shaun Hutson, SLUGS outdoes its creature feature peers by adding an extra dose of gross-out gore into the equation, culminating in one of the most squirm-inducing animal attack movies ever to slither its way across screens!

Extras:
This looks to be a HUGE step up from the old Anchor Bay DVD release of SLUGS, so naturally I MUST OWN THIS! SLUGS will be available at various online retailers on Tuesday, September 27th, and cost between $19.99 - $24.99. You can order a copy now from AMAZON.COM or from DIABOLIK DVD. (Also, may I suggest BULLMOOSE.COM, as they have very competitive pricing!)