LINEUP & SCHEDULE FOR HUDSON HORROR SHOW XIV: YET ANOTHER DECEMBER TO DISMEMBER! 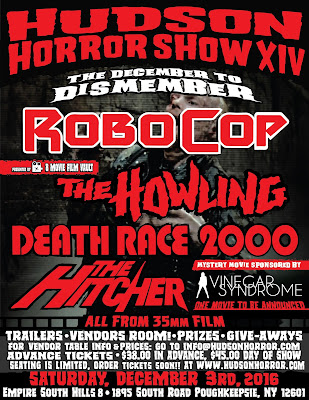 As I sit here typing about this upcoming film fest, I find it hard to believe that I'm once again helping to usher in a fantastic show that I was merely a bystander at five years ago. Since HUDSON HORROR SHOW IV (the original December to Dismember), I've become a fixture of this bi-annual event, sponsoring the likes of INFRA-MAN, LADY TERMINATOR, FRIDAY THE 13TH PART 2, and NIGHTBREED!

This time around I'm proud to help Chris Alo and his merry band of Horror fanatics kick-off yet another high quality Hudson Horror Show, with a strong lineup of genre favorites! Tickets go on sale Friday, September 16th for $38.00 on their official website, for Theaters #1 and #6! That's right Vault Dwellers, this show is so huge it takes TWO SCREENS to harness all of the awesome!

ROBOCOP (1987)
This film is one of my all-time favorites! ROBOCOP boasts costume design and effects by Rob Bottin, an amazing soundtrack composed by Basil Poledouris, an unbeatable cast made up of Ronny Cox, Peter Weller, Kurtwood Smith, Nancy Allen and other familiar faces, plus first-rate directing by Paul Verhoeven (STARSHIP TROOPERS, SHOWGIRLS)!

When officer Alex Murphy is gunned-down in the line of duty, his corpse is reconstituted inside the bulletproof body of a crime-fighting cyborg! As RoboCop cleans up the streets of "Old Detroit," Murphy begins to regain his humanity, and seeks vengeance against the gang of thugs that murdered him and ruined his life!

THE HOWLING (1981)
Sponsored by yours truly, this Joe Dante classic features a news anchor (Dee Wallace) and her hubby staying at a secluded retreat called "The Haven." Though intended to be an escape from the trauma of tracking down a serial killer, it turns out that the backwoods paradise is actually a refuge for werewolves! Though the bulk of the shapeshifters are trying to get a handle on their animalistic urges, there are some that strongly disagree, and readily let loose the beast within. This leads to some cool transformation scenes (courtesy of Rob Bottin!), a philosophical discussion of the human id, and werewolf sex!

DEATH RACE 2000 (1975)
After such a strong audience reaction to the trailer that was shown at the previous Hudson Horror Show, DEATH RACE 2000's inclusion in the roster is a no-brainer! Set in a future where the Cannonball Run has become a deadly national sport, Roger Corman's insane sci-fi classic pits colorful drivers against one-another in a sprint from the East Coast of the United States, all the way to the West. The catch? The drivers must run down, run over, maim, and kill as many innocent bystanders as possible to gain points!

Featuring Sylvester Stallone in an early role, alongside the likes of David Carradine and Mary Woronov, this violent version of Wacky Races is sure to be a real crowdpleaser!

THE HITCHER (1986)
Followed up by a lousy sequel, and a dull reboot, Robert Harmon's THE HITCHER has withstood the test of time. This thriller features a cat-and-mouse game between a young man (C. Thomas Howell) and a murderous drifter (Rutger Hauer). After escaping a crazed hitchhiker, Jim Halsey is pursued relentlessly, and framed for numerous murders, by the cold and calculated mystery man.

THE HITCHER is a great flick, and will definitely make you think twice before picking up any hitchhikers, and it'll be a real treat to see it projected in 35mm!

I SPIT ON YOUR GRAVE (1978)
Egads! It was all fun and games until Meir Zarchi's quintessential "rape and revenge" classic was added to the roster! I SPIT ON YOUR GRAVE is not a pleasant film, and features actress Camille Keaton as Jennifer, a writer looking for seclusion in order to focus on her craft. Her plans go completely out the window once four hillbillies break into her cabin and gang-rape her multiple times, then leave her for dead.

Once she physically recovers from the attack, she begins a quiet, campaign of vengeance against the wicked men who destroyed her innocence. After you see this movie, you'll never look at a seemingly harmless rub & tug in the bathtub the same way again!

MYSTERY MOVIE
This is a complete unknown gang! Even I don't know what's playing, and I'm usually privy to that information! I sense something HUGE is in store for us Hudson Horror fans!


THE SCHEDULE(S)
*Movie times include trailers, all times are tentative and subject to change.

Tickets are on sale NOW, and pre-orders end on November 28th at midnight! After that, all remaining tickets (if any are left over) will be sold at the door for $45.00! So be sure to pre-order your tickets Vault Dwellers, and prepare yourselves for another great HUDSON HORROR SHOW!

Posted by The Vault Master at 3:29 AM