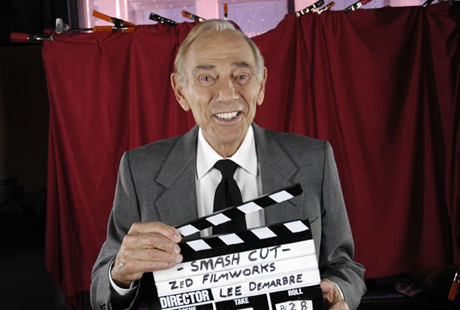 While most of America watched football and/or watched in disbelief at the debate between our two main Presidential candidates, others were mourning the death of a legend. On Monday, September 26th, 2016, Herschell Gordon Lewis, the beloved "Godfather of Gore," passed away in his sleep.

I had a chance meeting with Mr. Lewis years ago at a Monster-Mania Convention. I was walking backwards in the main lobby of the hotel, while talking to my friend Adam, when he suddenly pointed over my shoulder and said "Hey, is that guy someone famous?" I turned and there was H.G. Lewis in the flesh! I excitedly shook Lewis' hand and said "thank you for the films you've made," then got a quick photo. (Sadly said photo is long gone - lost in the memory card of an old cell phone.)

But even before that, H.G. Lewis had a major impact on me. While I am now constantly driving around the tri-state area in search of retro film fests (which are thankfully plentiful these days), I got bit by the 35mm bug back in July of 2014. A now defunct event called Mondo Movie Night kicked off a series of screenings with a 35mm presentation of BLOOD FEAST. Not only was I hooked on seeing films in their original format, but it instantly made me a fan of Lewis' work!


And speaking of which, Herschell Gordon Lewis directed nearly forty films in his lifetime, and was a jack of all trades. He composed music for some of his films, worked on the effects for others, and wrote the screenplays for at least half of the movies he directed! Lewis strove to show moviegoers something they had never seen before, and it all started with his 1963 classic BLOOD FEAST. Though you can't really say it's a good film, it was the first splatter flick in existence, and opened the door for a growing genre that was looking to push the envelope.

Had Lewis not introduced the world to Fuad Ramses and his cannibalistic cuisine, we may never have had the films of George A. Romero, Peter Jackson, Sam Raimi, and the slew of Horror filmmakers that came after. So thank you Mr. Lewis, for your contributions to film, particularly in the realm of exploitation cinema! As long as your films exist, you will never be forgotten.

By all accounts (and my brief personal experience), Lewis was a kindly gentleman that embraced his fandom, and the world shall not look upon his like again. Here's hoping that his swan song (i.e. BLOODMANIA) finds a new audience once it is released, and helps carry on his memory for years to come. Rest in peace Herschell - we'll miss you.