Lord Buckethead: The Origin of the Outlandish Political Candidate Revealed! 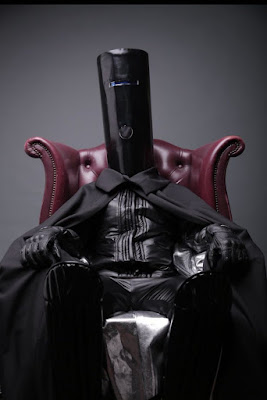 WHO IS LORD BUCKETHEAD?!

Truth be told, I haven't a clue. I do not know the identity of the man in the black cape, leather suit, and absurdly tall helmet that earned 249 votes during his campaign for a seat in Britain's Parliament. But I do know the origin of the character that this man is playing!

Have you ever had one of those moments where you are researching something online, and then find yourself wandering across the vast expanse of the internet? You start out reading up on one subject, then twenty minutes later, you're pouring over miles of text about something else entirely?

Well that happened to me last night. As I was preparing a post about the upcoming 3-DEMENTIA film fest taking place next weekend, I started doing some digging on a pair of films in the lineup, namely ROTTWEILER and HIT THE ROAD RUNNING. Both films were directed by Worth Keeter, and feature Earl Owensby in a lead role.

I thought to myself "Just who is this Earl Owensby?" so I clicked on his name and brought up his IMDB page. (As you may just done.) As I poured over his filmography as a Producer, I noticed a listing for a film called HYPERSPACE. Curious, I clicked over to that page, and as I perused the list of actors and characters, I stopped dead.

One name on the list of characters stood out immediately, and I began to laugh. That name of course, was LORD BUCKETHEAD! Thinking it was pure coincidence, I decided to look up more info about Britain's hilarious political candidate. Sure enough, I immediately found that Lord Buckethead represents a political party called GREMLOIDS (one of several alternate titles for HYPERSPACE), and was "based on" a "Hyperspace character."

This blew my mind Vault Dwellers, so I did some additional digging about HYPERSPACE. Released in 1984, this film was a parody of STAR WARS, featuring an opening text scrawl, and Lord Buckethead, who is clearly a spoof of Darth Vader. With a platoon of Jawa knock-offs at his command, Lord Buckethead arrives on Earth (after a miscalculation), and scours the immediate area for "the Princess" and "the transmissions."

So naturally you may want to see this film for yourself, if only to confirm that I'm not making this all up. Unfortunately, it is currently out of print and physical copies are a bit hard to find. But, in the words of Ian Malcolm, "Life.... finds a way."

So enjoy HYPERSPACE below, thanks to the efforts of my podcasting cohost "Silent" Steve, and YouTube uploader Christopher Kim.


As for the enigmatic Lord Buckethead, he's currently lurking somewhere in England, awaiting the day that he can add Prime Minister to his résumé, right beneath "space lord." To stay up to date on Lord Buckethead's further political ambitions, follow him on Facebook, Twitter, and YouTube.