Severin Films shows you what is BEYOND THE DARKNESS on 07/25! 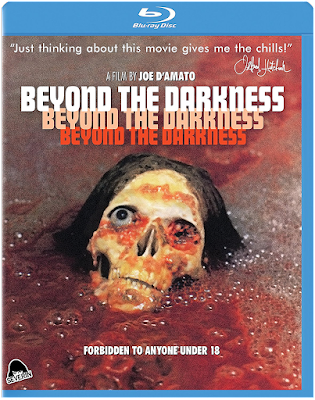 WATCH "BEYOND THE DARKNESS" AND ROCK OUT TO THE SOUNDTRACK WITH SEVERIN FILMS' NEW BLU-RAY RELEASE!

I've got a love/hate relationship with the films of Joe D'Amato, so it's not too shocking that I'm unfamiliar with BEYOND THE DARKNESS! However, this new 2-Disc set from Severin Films looks almost too good to pass up!

Synopsis: It has been denounced as “revolting” (SplatterDay.com), “stomach-churning” (Classic-Horror.com) and “shower-prompting” (Fandor), while simultaneously acclaimed as “bone-chilling” (Chas Balun), “truly classic” (The Spinning Image) and “a must-see” (Horror.com). Now experience “D Amato’s masterpiece” (BloodyDisgusting.com) like you’ve never seen or heard it before!

Cinzla Monreale (THE BEYOND) and Franca Stoppi (THE OTHER HELL) star in this psycho sickie, where a widowed husband decides to stuff his wife's corpse and turn it into a doll, leading him down a rabbit hole of further insanity and depravity! Severin is proud to present this sleaze-fest (which is also known as BURIED ALIVE and BUIO OMEGA) from director Joe D’Amato (ANTHROPOPHAGUS), restored in HD for the first time ever!

Extras:
Severin's BEYOND THE DARKNESS limited Blu-ray/CD combo is due out on Tuesday, July 25th, and can be purchased from AMAZON, BULLMOOSE, DIABOLIK DVD, or directly from SEVERIN! (It's also important to note that Severin is releasing out a "Necro Bundle" that comes with even more cool add-ons!)