I've recently become acquainted with the folks at Umbrella Entertainment and I'm super happy to begin sharing all of the great titles this Australian label is cranking out! Coming in the first week of August, Umbrella has one heck of a lineup that you Region Free collectors will not want to miss out on! Scroll on down to see what they are releasing to DVD & Blu-ray! 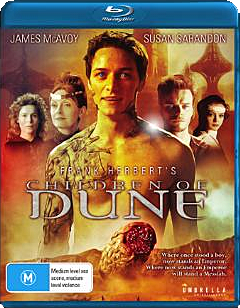 CHILDREN OF DUNE
Synopsis: The future of humanity is left in doubt as the twins of Paul Atreides become embroiled in the turbulent political landscape of Arrakis. Born with special abilities and superhuman prescience that not only empowers them but places them in considerable jeopardy amongst their kind, Leto (James McAvoy, ATONEMENT) and Ghanima (Jessica Brooks, SUPERNOVA) continue the fight against the malevolent forces of Baron Harkonnen.

With the looming threat of civil war amongst the Fremen and Princess Wensicia’s (Oscar winner Susan Sarandon, DEAD MAN WALKING) own devious plot to assassinate the Atreides heirs, their survival is paramount to ensure the future of the universe for generations to come. 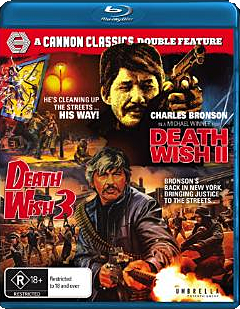 DEATH WISH II Synopsis: In an attempt to put his grisly past behind him, Paul Kersey (Charles Bronson) has moved to Los Angeles to begin life anew. After a violent altercation with a bunch of street thugs, Kersey is once again a marked man. A legacy of violence is unleashed as Kersey sets out to track down the five thugs who have turned his life upside down and provided him with an insatiable drive for vengeance.

DEATH WISH 3 Synopsis: Paul Kersey (Charles Bronson) arrives in New York to visit an old friend, but is horrified to find him the victim of a brutal attack. Kersey snaps back into his old ways - gearing up as the silent avenger once more - ready to strike back against injustice and wage bloody war against the city's growing population of thugs and reprobates. 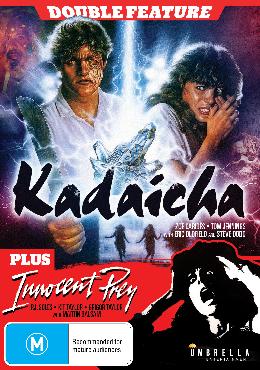 KADAICHA Synopsis: An Aboriginal elder with the power of life or death over those who disobey the laws of the Aboriginal people. When the unsuspecting residents of a suburban housing development encounter strange occurrences in their neighborhood it is only a matter of time before someone upsets "The Kadaicha Man."

Discovering that their homes were built atop a sacred Aboriginal burial site, a group of teenagers are subject to nightmarish dreams about an eerie cave with sinister rock paintings and the brooding evil that dwells within. When they awake, a souvenir of their nightmare rests on their pillow – a stone destined to haunt them to their very core and place them in mortal jeopardy.

INNOCENT PREY Synopsis: Cathy (P.J. Soles) is suspicious of Joe's (Kit Taylor) need to work late every night. Discovering Joe's car parked outside of a motel, Cathy watches in horror as Joe slashes a prostitute to death with a razor. Joe is sent to the state hospital for the criminally insane and Cathy attempts to rebuild her life in Australia. Soon after her arrival, Cathy becomes the object of obsession for her landlord who observes her every movement, ready to cause all manner of mayhem to her newfound freedom. 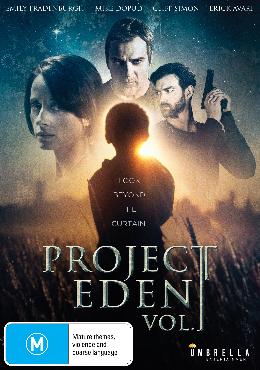 Synopsis: PROJECT EDEN is the first volume in a planned two-part duology. It is the brainchild of Australian Writers/Directors Ashlee Jensen & Terrance M. Young.

​Aided by an ex-military officer, a young woman becomes an unwitting fugitive after discovering that her son's catatonic state may be at the heart of a global conspiracy.

All of these titles will be available on Tuesday, August 2nd, and you can order them directly from UMBRELLA ENTERTAINMENT'S website now!

Posted by The Vault Master at 2:22 AM