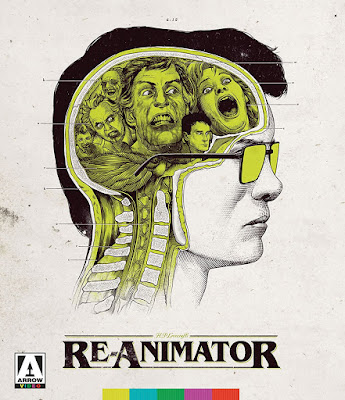 ARROW VIDEO HAS A GOOD HEAD ON THEIR SHOULDERS… AND ANOTHER ONE ON THEIR DESK! GET THEIR LIMITED EDITION RE-ANIMATOR BLU-RAY ON 08/08!

Stuart Gordon's RE-ANIMATOR is one of my all-time favorite Horror films (and H.P. Lovecraft adaptations)! The script is smart and witty, and the cast is fantastic, with Jeffrey Combs stealing the show as Dr. Herbert West. I've already purchased this movie several times in various formats, but it looks like I'll have to double dip once again because this Arrow release looks incredible!

Synopsis: When medical student Dean Cain (Bruce Abbott) advertises for a roommate, he soon finds one in the form of Dr. Herbert West (Jeffrey Combs). Initially a little eccentric, it some becomes clear that West entertains some seriously outlandish theories – specifically, the possibility of re-animating the dead. It’s not long before Dean finds himself under West’s influence, and embroiled in a serious of ghoulish experiments which threaten to go wildly out of control…

Based on H.P. Lovecraft’s classic terror tale ‘Herbert West – Reanimator’ and featuring a standout performance from Jeffrey Combs as the deliciously deranged West, Re-Animator remains the ground-zero of ’80s splatter mayhem and one of the genre’s finest hours.

Whoa! Two cuts of the film (both restored in 4K!), tons of interviews, commentaries, and documentaries?! I NEED THIS! Arrow Video's Limited Edition RE-ANIMATOR is now due out on August 8th, and can be purchased immediately from AMAZON, BULLMOOSE, or DIABOLIK DVD!