Vestron Collector's Series conjures up the WARLOCK trilogy on Blu-ray! 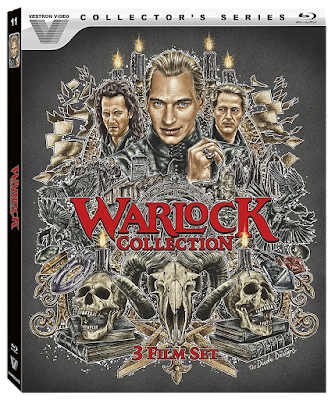 WHEN THE ARMAGEDDON COMES, YOUR INNOCENCE WILL END! VESTRON COLLECTOR'S SERIES ADDS THE "WARLOCK" TRILOGY TO ITS ROSTER!

I never thought I'd see the day that WARLOCK would come to Blu-ray, let alone its sequels! This new Vestron Collector's Series release looks awesome, and I can't wait to add it to my own personal Blu-ray archives!

WARLOCK Synopsis: A warlock (Julian Sands) flees destruction and time travels from the 17th century to "modern" times. However, a witch hunter has followed him to the future and is hellbent on stopping the man-witch from "uncreating" the world as we know it!

WARLOCK II: THE ARMAGEDDON Synopsis: Julian Sands returns as the titular Warlock! Modern day druids train two youths to battle the evil spellcaster and stop him from collecting six runes that will allow him to free Satan and create Hell on Earth!

WARLOCK III: THE END OF INNOCENCE Synopsis: A college student inherits a derelict house. With the help of some friends, she arrives to clear out some family heirlooms, only to be attacked by the Warlock!

Extras:
The Vestron Collector's Series' WARLOCK COLLECTION is now available wherever Blu-rays are sold! You can grab your copy now (which should be around $25 - $30) at AMAZON, BULLMOOSE, or DIABOLIK DVD!