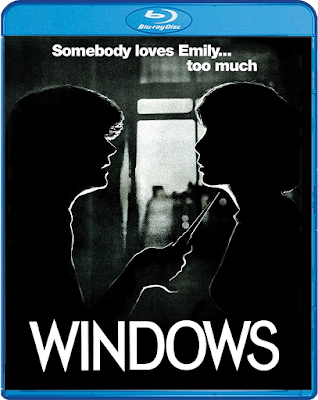 ENTER A WORLD OF LUST AND DEPRAVITY WITH SCREAM FACTORY'S BLU-RAY RELEASE OF "WINDOWS!"

Scream Factory is having  stellar year, and continues to add more and more interesting titles to their archives. Case in point, WINDOWS, a psychological thriller that I never even knew existed until recently! It sounds pretty enticing (would probably make a great double feature with their Blu-ray of THE CRUSH), and is yet another stepping stone in the neverending quest to collect all of their releases!

Synopsis: The withdrawn and recently divorced Emily (Talia Shire, ROCKY) lives a lonely existence. But after enduring a bizarre assault at the hands of a stranger, Emily finds both comfort and friendship in her neighbor Andrea (Elizabeth Ashley, THE CARPETBAGGERS). As Emily contends with the fact that her attacker still stalks the streets, she slowly discovers that there is more to her new acquaintance, Andrea, beyond her helpful façade – something that becomes a window to the dark soul of depraved obsession.

Directed by acclaimed cinematographer Gordon Willis (THE GODFATHER, ANNIE HALL) and featuring a score by the legendary Ennio Morricone (THE GOOD, THE BAD, & THE UGLY, THE HATEFUL EIGHT, et al.) WINDOWS is a dark and controversial thriller of lust and psychological pain.

Extras:
WINDOWS is currently available wherever Blu-rays are sold. Pick up a copy today from AMAZON, BULLMOOSE, DIABOLIK DVD, or directly from SHOUT! FACTORY's website!