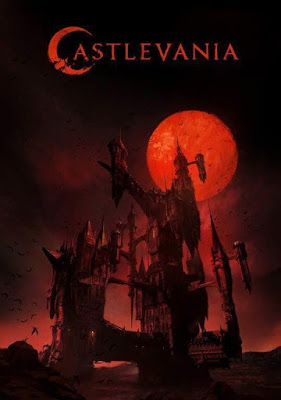 VAULT VID-O-RAMA RETURNS TO CELEBRATE THE RELEASE OF "CASTLEVANIA" ON NETFLIX!

Imagine my surprise tonight when someone notified me that NetFlix's animated CASTLEVANIA show was now streaming! I immediately signed on and binged all four episodes, and was left wanting more. The animation, story, and characters are awesome!

Set during the timeline from CASTLEVANIA III: DRACULA'S CURSE, Trevor Belmont, last of his line, comes out of a drunken stupor to help defend the people of Wallachia from an army of monsters that was unleashed by a vengeful Dracula! Along the way he gathers new allies, and sticks it to organized religion as he puts his whip ("The Vampire Killer") to good use!

To celebrate the release of this awesome show, let's get all nostalgic for all things Castlevania with an all new VAULT VID-O-RAMA!

CASTLEVANIA MUSIC
The best part of any Castlevania game has always been the music! So it comes as no surprise that decades later, the music from the classic NES and SNES games is still beloved, and has been remixed into various musical styles. So go ahead and rock out to the following selection of kick-ass Castlevania music, featuring classic video games tunes, covers, parodies, and remixes!


CASTLEVANIA GAME REVIEWS AND COMMENTARY!
Arin "egoraptor" Hanson has made some great videos chronicling the history of the classic Castlevania games. While his (sadly short-lived) "Sequelitis" series delves into the pros and cons of the earlier games, he's also done a bunch of other fun vids highlighting this video game franchise. Also, you shouldn't miss out on the Angry Video Game Nerd's reviews of the series! Peep 'em out below and gain knowledge Vault Dwellers!

VIDEO GAME COMMERCIALS
You knew this was coming Vault Dwellers! Here's a selection of classic commercials for the various entries into the Castlevania video game series from both America and Japan!

CAPTAIN 'N' - THE GAME MASTER
Avid gamer Kevin Keene gets sucked into the "Ultimate Warp Zone" through his TV and ends up in "Videoland." Along with other Nintendo characters like Kid Icarus, Megaman, and Simon Belmont, "Captain N" battles the evil Mother Brain and her minions to protect the gaming universe. Lasting three short seasons, Captain N generated comic books and (if memory serves) a breakfast cereal. Head into the ultimate nostalgia zone below and watch the RETURN TO CASTLEVANIA episode, or marathon the first two seasons!

VAMPIRE HUNTER D
Finally, after you finish the four episodes of CASTLEVANIA and still thirst for more animated vampire hunter awesomeness, I highly suggest the double-threat of VAMPIRE HUNTER D and VAMPIRE HUNTER D: BLOODLUST! Never heard of 'em? Then watch them below and enjoy!