Larry Cohen's IT'S ALIVE TRILOGY Comes to Blu-ray on May 15th from Scream Factory! 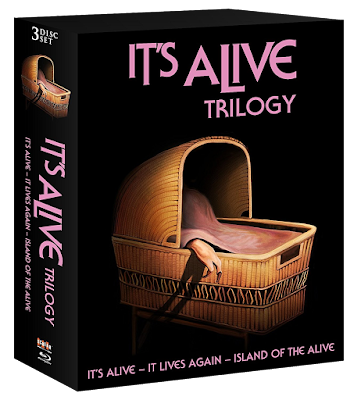 LARRY COHEN'S TRIO OF KILLER MUTANT BABY FLICKS IS COMING OUT IN AN ALL NEW BOXED SET FROM SCREAM FACTORY!

"There's only one thing wrong with the Davies baby.... IT'S ALIVE!" So says one of the taglines for Larry Cohen's unforgettable horror classic, IT'S ALIVE. Growing up, I discovered this cult oddity in the Horror section of my local Blockbuster Video, then saw the subsequent sequels pop up on television on TNT'S MonsterVision (with Joe Bob Briggs)! Though it's been a while since I've revisited them, I am completely ecstatic that Scream Factory has broken into the Warner Bros. vaults in order to give these movies a proper Blu-ray release! 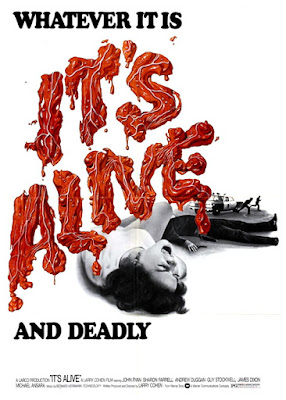 Synopsis: It's newborn and ... IT'S ALIVE ... and murder is what it knows best! A proud couple's bundle of joy is really a newborn terror in filmmaker Larry Cohen's cautionary cult hit that tapped into environmental fears.

Lenore (Sharon Farrell) and Frank Davies (John Ryan) are horrified to learn that their newborn child is a murderous mutant that escapes from the hospital shortly after murdering the doctors in the delivery room. With the cops busy seeking the violent newborn, Frank and his wife struggle to come to terms with their monstrous offspring, and unlock the dark secret behind its origins! 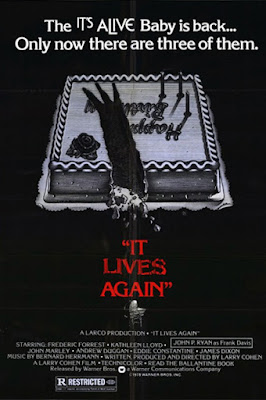 Synopsis: Two brave parents, Eugene and Jody Scott (Frederic Forrest and Kathleen Lloyd) try to evade the authorities when it is suspected that they are about to give birth to a mutant! With the aid of Frank Davies, they escape from a hospital and end up joining an underground organization that is studying the monstrous infants, and believes they are the next step in human evolution.

Hot on their heels are a government task force, and a group of anti-mutant baby fanatics whose goal it to wipe out the miniature abominations! Will the Scott's tiny terror survive, or will IT share the same fate as all those that came before it? Watch IT LIVES AGAIN to find out! 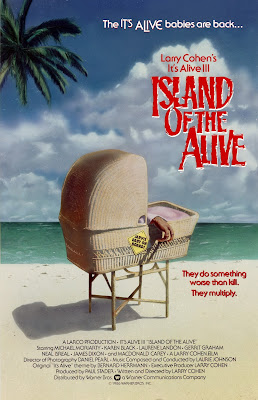 Synopsis: Stephen Jarvis (Michael Moriarty) pleads in court, for the life of his mutant son. Eventually he succeeds in winning the case, and the court orders the creatures to be dropped off on a deserted island. Five years later, Jarvis joins an expedition to study the creatures' growth, only to become a captive on the boat after the rest of the team is either killed or left behind.

As the creatures sail back towards the coast of the United States, Jarvis must figure out what they want in order to save them, and himself. Discover their fates when you watch this bizarre capper to Larry Cohen's IT'S ALIVE TRILOGY!


Scream Factory's IT'S ALIVE TRILOGY is due out on Tuesday, May 15th and is reasonably priced, costing approximately $32 - $40! Don't miss out on this trilogy of crazy flicks from the director of GOD TOLD ME TO, Q: THE WINGED SERPENT, and THE STUFF! Order your set now from AMAZON, BULLMOOSE, DIABOLIK DVD, or directly from SHOUT! FACTORY if you want it two weeks early!

Posted by The Vault Master at 6:00 PM