On May 22nd, Scream Factory Brings Long Out of Print Cult Classic OF UNKNOWN ORIGIN to Blu-ray! 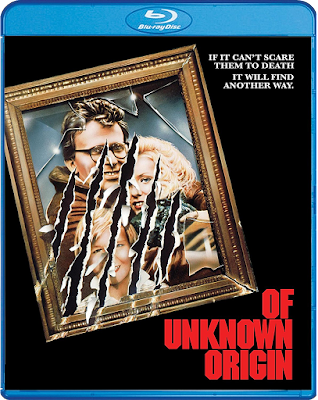 I was extremely excited to hear that Scream Factory had picked up this title Vault Dwellers! The film has been out of print for far too long, and is just one of several awesome films directed by the late George Cosmatos (who also directed TOMBSTONE, COBRA, RAMBO: FIRST BLOOD PART II, and LEVIATHAN)! Never heard of this movie? Well then by all means continue reading so you can get as excited as I am!

Synopsis: When not mired in the corporate rat race, Wall Street executive Bart Hughes is king of his sleek Manhattan brownstone ... until he finds his castle under siege by the most determined of home intruders. Forced to enter a rat race of an entirely different sort, Bart takes a stand, with his survival and sanity at stake.

Peter Weller (ROBOCOP, Sons of Anarchy) stars in Of Unknown Origin, an eerie and nerve-tingling suspense thriller directed by George P. Cosmatos and the winner of Paris International Film Festival Awards for Best Picture and Actor. Cleverly and compellingly, the film draws you into a battle of wits, namely one with an intruder that's formidable, persistent and clever enough to lure Bart (Weller) along on an unwitting path to self-destruction. In the battle of man vs. beast, push has come to scream.

Extras:
OF UNKNOWN ORIGIN will be released on Tuesday, May 22nd and will cost between $20 - $24. If you are a fan of Peter Weller, George P. Cosmatos, and/or movies featuring killer rats, then you NEED to pick this up. Order yourself a copy now at AMAZON, BULLMOOSE, DIABOLIK DVD, or directly from SHOUT! FACTORY if you want it two weeks early!