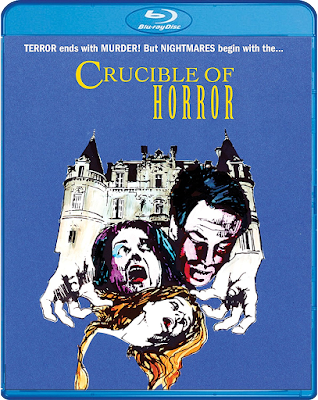 This past Tuesday, Scream Factory gave CRUCIBLE OF HORROR, Larry Cohen's FULL MOON HIGH, and the super obscure SUPERBEAST their Blu-ray debuts! I've never seen any of these movies before, so I am super excited to check them out! Continue reading below to get the full details on these new titles, and consider adding them to your ever-growing collections Vault Dwellers!

Synopsis: This horrifying film tells the story of Edith (Yvonne Mitchell, George Orwell's 1984), a terrorized wife, who, along with her daughter, plots to kill her husband, Walter (Michael Gough, BATMAN (1989), SLEEPY HOLLOW), to end his abusive treatment of them. They poison him and make his death look like a suicide. But they didn't count on one thing: Walter isn't ready to die...

Hmm.... you know, it seems to me that this would make a GREAT double feature with THE LEGEND OF HELL HOUSE. Heck, it almost seems like CRUCIBLE OF HORROR could act as a prequel to it!

Extras:
CRUCIBLE OF HORROR is now available wherever Blu-ray discs are sold! Get your copy now from AMAZON, BULLMOOSE, DIABOLIK DVD, or directly from SHOUT! FACTORY. 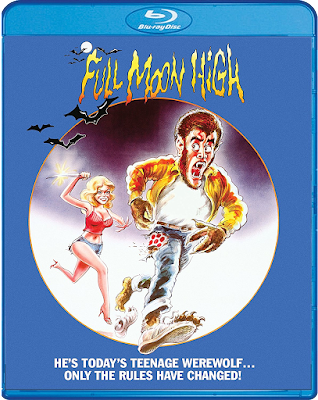 Synopsis: The problems of a typical high-school teenager take on monstrous proportions in this comical send up of horror movies!

The most important thing to quarterback Tony Walker (Adam Arkin, HALLOWEEN H20) is to win the big game against archrival Simpson High. But this plan soon changes when Tony is bitten by a werewolf – and that's when things really start to get hairy!

Now, whenever there's a full moon, he transforms into a growling beast that hungrily chases down beautiful girls. Cursed to live forever as a teenager with uncontrollable urges, Tony realizes he must find a way to end this cycle of animalistic excess.

Extras:
FULL MOON HIGH is currently available at any of these online retailers: AMAZON, BULLMOOSE, DIABOLIK DVD, and SHOUT! FACTORY. 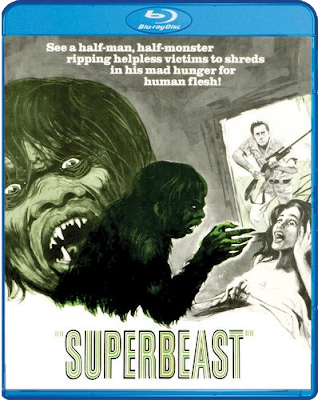 Synopsis: Dr. Alix Pardee (Antoinette Bower, PROM NIGHT) travels to the Philippines when she hears some people have been attacked by a humanoid creature. Once there, she finds that these beasts are the product of Dr. Bill Fleming (Craig Littler).

Fleming is trying to cure criminals by genetically engineering their brains. These experiments are creating half-man, half-beasts. In a nod to The Most Dangerous Game, the beasts are set loose and hunted by the doctor's evil benefactor.

Extras:
SUPERBEAST can currently be procured from any of these fine sellers of physical media: AMAZON,  BULLMOOSE, DIABOLIK DVD, and SHOUT! FACTORY.