THE BONEYARD is Coming to DVD & Blu-ray from Code Red DVD! 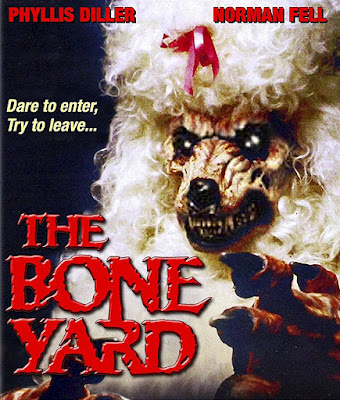 I recall reading a short one-paragraph review of THE BONEYARD in a movie guide from the 90s, but never managed to track a copy down. In fact,  until recently I had forgotten this odd gem existed. Now, thanks to Code Red DVD, I can scope out this quirky classic in high-definition!

Synopsis: A policeman (Ed Nelson) and a psychic (Deborah Rose) link cult mayhem to a morgue (run by Norman Fell) where ancient ghouls are on the loose! The film plunges into the nightmarish experiences of a portly, depressed psychic Alley Oates (Rose), whose involvement in a grisly child-murder case leads her and her detective partner Shepard (Nelson) to an imposing, fortress-like mortuary. Chen, the owner of the funeral home and prime suspect in the case, claims the three mummified corpses in question are not children but ancient demons known as Kyoshi.

It seems the little monsters have been around for centuries as a result of an age-old curse and can only be placated with offerings of human flesh with which the mortician has been supplying them his entire life. When Chen is jailed on murder charges, the under-fed ghouls awaken in search of dinner, trapping the staff inside the mortuary walls and devouring them. The survivors, including Rose and Nelson, use every means at their disposal to combat the demons, which have possessed the bodies of morgue attendant Mrs. Poopinplatz (Phyllis Diller) and her poodle, mutating them into hideous monsters.

THE BONEYARD is due out on Tuesday, April 24th on Blu-ray and DVD from Code Red DVD! The DVD costs about $14 (and I assume has the same extras as the Blu-ray release), while the Blu-ray disc costs between $17 - $20! You can order a copy now from AMAZON, BULLMOOSE, or DIABOLIK DVD!