Umbrella has had a really solid release slate this year, with numerous Ozploitation classics making their DVD & Blu-ray debuts. But it looks like they are taking a bit of a breather, as there aren't very many new Cult, Horror, or Exploitation (i.e. Ozploitation) titles this month.

THE ADVENTURES OF SKIPPY (Australia's answer to Lassie and Flipper) is now available in its entirety for the first time worldwide, as is the fully uncut version of Brian Yuzna's SOCIETY, and Umbrella's highly-anticipated DRIVE-IN DELIRIUM: THE NEW BATCH, a monstrous compilation disc that contains 175 fully restored movie trailers!

ANNOUNCEMENTS:
* On May 2nd, Umbrella is bringing DEATH WISH 4 & 5 to Blu-ray as part of their Cannon Films Collection, with audio commentaries, trailers, and more! They are also releasing THE TRACKER, an award-winning Drama from 2002.

* Still no release date for RAZORBACK, but I can absolutely assure you that when it does finally come out, it will be the undisputed definitive release of the film! 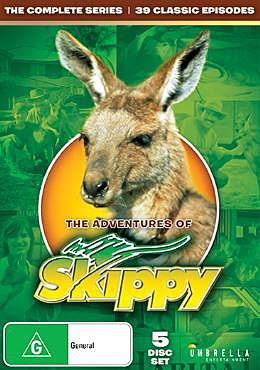 Synopsis: Since 1967 Australia’s most famous Kangaroo, Skippy, has been a worldwide favorite. The original series has been seen in nearly every country in the world since then, and she's back in The Adventures of Skippy.

Sonny Hammond (Andrew Clarke – SWORD OF HONOUR, ANZACS) has grown up and, like his father before him, is a Park Ranger and co-owner of Habitat - a small animal park on the river behind Surfers Paradise. He's also a widower with two twins, Louise (Kate McNeil) and Jerry (Simon James). Rescued from the aftermath of a hit-and-run accident Skippy, the beloved 4th member of the Hammond household, grew up with Louise and Jerry.

Teaming with the Hammonds are Thelma Woods (Moya O'Sullivan - PLAYING BEATIE BOW), the other owner of Habitat, and the 27-year-old vet, Kate Burgess (Fiona Shannon), and cameos by Australian TV legends such as Tommy Hanlon Jr (It Could Be You), June Salter (The Restless Years, A Country Practice).

Join them as they team up to foil the likes of animal smugglers, repellent rustlers, and even runaway convicts in this complete collection, featuring all 39 episodes!

CLICK HERE to order THE ADVENTURES OF SKIPPY on DVD! 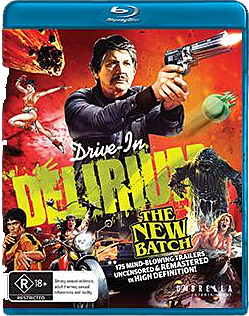 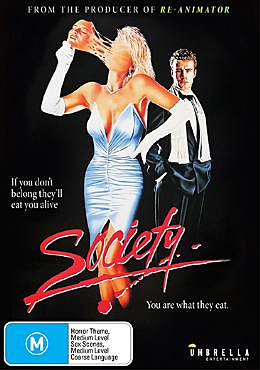 Synopsis: Legendary producer Brian Yuzna (RE-ANIMATOR, RETURN OF THE LIVING DEAD), creates a tense and gory work of horrific social satire in his directorial debut! Billy Whitney (Billy Warlock - Baywatch, General Hospital), a model rich kid and prefect at the Beverley Hills Academy, is inexplicably embroiled in a spiraling web of fear and paranoia, a surreal, psychotic world that is fast becoming a nightmare.

CLICK HERE to purchase SOCIETY on DVD from Umbrella Entertainment!


These new titles are also currently available from Umbrella Entertainment:


As always, all of the titles listed above are REGION FREE and exclusively available from Umbrella Entertainment's website!

Posted by The Vault Master at 1:38 AM