On April 24th, Scream Factory Gives You Three More Reasons to Love Them! 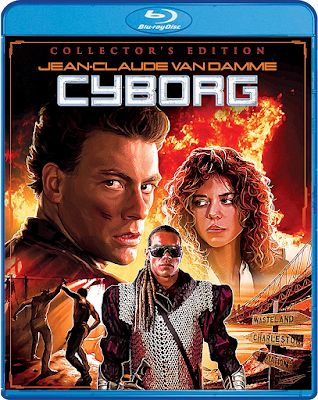 I've got to admit that Scream Factory has been on fire this year! And this upcoming Tuesday is no exception as they finally release the long-delayed Collector's Edition of Albert Pyun's CYBORG, along with DAUGHTERS OF SATAN, and a re-release of their TROLL & TROLL double feature (sans the BEST WORST MOVIE documentary)! Scroll onward to get the full specs & extras for these three upcoming titles!

Synopsis: Jean-Claude Van Damme stars as the future's most fearsome warrior in this adrenaline-charged sci-fi thriller! Deteriorating from a deadly plague, 21st-Century America is descending into a barbaric nightmare. Only Pearl Prophet (Dayle Haddon), a beautiful half human/half cyborg, has the knowledge necessary to develop a vaccine.

But during her quest to gather data and bring the cure to the world, Pearl is captured by cannibalistic Flesh Pirates who plot to keep the antidote for themselves and rule the world. Now, only saber-wielding hero Gibson Rickenbacker (Van Damme) can rescue her and save civilization.

Extras:
CYBORG (COLLECTOR'S EDITION) will be available everywhere on Tuesday, April 24th and will cost in the neighborhood of $16 - $25. Order your copy now from AMAZON, BULLMOOSE, DIABOLIK DVD, or directly from SHOUT! FACTORY (which will net you a free 18x24 rolled poster, while supplies last)! 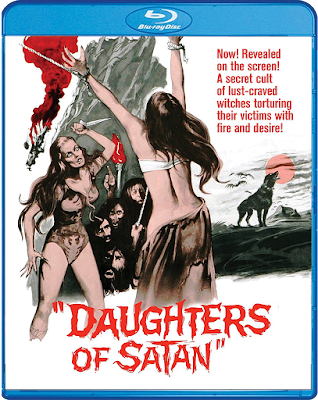 Synopsis: Be careful what you witch for with this spellbinding thriller that delves into the realms of ancient covens and the conquistadors who loathe them. Tom Selleck delivers a commanding performance as James Robertson, an antique dealer living in Manila. James buys a Spanish painting dating back to 1592 from an art gallery ... because the painting depicts three witches being burned at the stake and one of the witches has an uncanny resemblance to James' wife, Chris.

But the similarity turns out to be much more than a coincidence when Chris becomes possessed by the spirit of her evil doppelganger. She soon meets two local women who resemble the other two witches from the painting. The three decide to murder James, as he may be a descendant of the conquistador responsible for the burning of the original coven.

Extras:
DAUGHTERS OF DARKNESS will also be available on April 24th wherever Blu-ray discs are sold and should cost you around $20 - $24. Order a copy now from AMAZON, BULLMOOSE, DIABOLIK DVD, or directly from SHOUT! FACTORY. 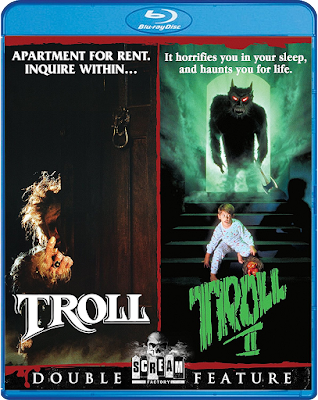 TROLL Synopsis: Lock the doors and pull out the weed-wacker for this house party of horror! One family is about to find out there's no place like home when a troublesome troll starts taking over their building, transforming each apartment into an overgrown garden of ancient evil and turning tenants into a horde of hairy hobgoblins!

TROLL 2 Synopsis: Those greedy goblins are back and hungrier than ever in this gourmet gross-out! Disguised as friendly country folk, a pugnacious posse of people-eating trolls lures visitors to their town. But a family of four is about to discover this place is a real tourist trap ... and now, the no-good gnomes must be destroyed before the family gets flambéed ... and the world becomes a buffet in this feeding frenzy of fear!

Extras:
TROLL
TROLL II
TROLL & TROLL II also comes out on the 24th and costs about $16 - $20. If you missed out on the previous release (which contained the excellent BEST WORST MOVIE doc) then here's your second chance troll fans! Secure your copy now at AMAZON, BULLMOOSE, DIABOLIK DVD, or directly from SHOUT! FACTORY.

Posted by The Vault Master at 6:00 PM