On December 10th, A Mister Becomes a Sister When DR. JEKYLL AND SISTER HYDE Arrives on Blu-ray! 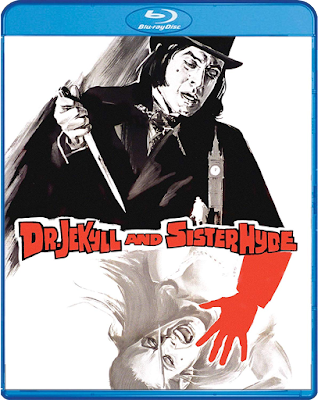 There have been so many film adaptations of the tale of Dr. Henry Jekyll, and his alter ego Mr. Hyde! Aside from the various remakes of the original story there's been a blaxploitation version (DR. BLACK, MR. HYDE), a bizarro sadomasochistic version starring Anthony Perkins (EDGE OF SANITY), plus various comedic takes on the character (ABBOTT AND COSTELLO MEET DR. JEKYLL & MR. HYDE, THE NUTTY PROFESSOR)!

But long before DR. JEKYLL & MS. HYDE, there was Roy Ward Baker's DR. JEKYLL AND SISTER HYDE! Scream Factory brings this Hammer Horror classic to Blu-ray for the first time in North America, porting over all the extras from the Region B release, and adding a few of their own! So whether you're all about collecting everything Scream Factory puts out, or are looking to collect the entirety of Hammer's filmography, you'll definitely want to pick this one up Vault Dwellers!

Synopsis: In Victorian London, young Dr. Jekyll attempts to create an "Elixir of Life" using female hormones stolen from the glands of fresh corpses. But when Jekyll drinks the experimental potion himself, he is transformed into a beautiful woman with an unstoppable taste for mayhem. Can both fiendish personalities share a rampage of ghastly murder and perverse desire, or will the ultimate battle of the sexes rage within?

Ralph Bates (HORROR OF FRANKENSTEIN, LUST FOR A VAMPIRE) and Martine Beswick (ONE MILLION YEARS B.C.) star in this gender-bending twist on the classic tale that horror fans consider one of the most provocative shockers in Hammer history.

Extras:
Scream Factory's new Blu-ray release of DR. JEKYLL AND SISTER HYDE arrives on Blu-ray on Tuesday, December 10th and should cost between $23 - $25! You can place your order for this Hammer Horror film now at AMAZON, BULL MOOSE, DIABOLIK DVD, or directly from SHOUT! FACTORY.