Look for DEPRAVED, THE FINAL PROGRAMME, and TRESPASSERS on Blu-ray on January 7th! 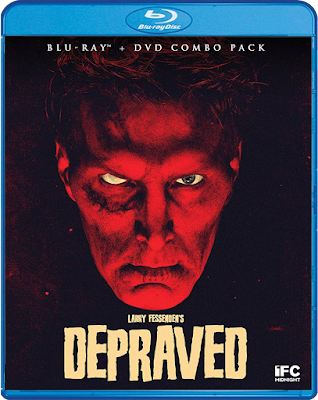 SCREAM FACTORY KICKS OFF 2020 WITH "THE LAST DAYS OF MAN ON EARTH" AND TWO NEW IFC MIDNIGHT TITLES!

Scream Factory capped off 2019 with some great Blu-ray releases (as mentioned here), and they're kicking off 2020 with a trio of new titles that I'm eager to check out! DEPRAVED is the latest fright flick from the mind of Larry Fessenden (THE LARRY FESSENDEN COLLECTION), THE FINAL PROGRAMME is a cult British oddity involving the creation of an immortal hermaphrodite (?!), and TRESPASSERS is a new thriller featuring Angela Trimbur (THE FINAL GIRLS) and Fairuza Balk (THE CRAFT). If any of those sound enticing then continue reading to get the full specs & extras of Scream's new releases!

Synopsis: The legend of Frankenstein gets a provocative modern update in this stylishly disturbing film from indie horror master Larry Fessenden (BENEATH). Suffering from PTSD following his stint as an army medic, Henry (David Call - The Sinner) now works feverishly in his Brooklyn laboratory to forget the death he witnessed overseas ... by creating life in the form of a man cobbled together from body parts. After he procures a brain from an unwitting victim, his creation — Adam (Alex Breaux - When They See Us) — is born. Soon, it becomes apparent that giving life to Adam was the easy part, and teaching him how to live in a dark and troubled world may be perilous. A complex, emotionally shattering tale about what it means to be human, Depraved re-imagines Mary Shelley's immortal fable as a modern-day tale of terror.

Extras:
Larry Fessenden's DEPRAVED arrives on Blu-ray (and DVD) on Tuesday January 7th and should cost between $18 - $19! Get yourself a copy now from AMAZON, BULL MOOSE, DIABOLIK DVD, or directly from SHOUT! FACTORY. Synopsis: As the world teeters on the brink of nuclear anarchy, London-based scientific genius Jerry Cornelius (Jon Finch - THE HORROR OF FRANKENSTEIN, FRENZY) discovers that the microfilm formula for a self-replicating human being is missing. With the help of beautiful computer expert Miss Brunner (Jenny Runacre - THE WITCHES), Cornelius must race through a wasteland of murder and madness to recover "The Final Programme," which may very well trigger the creation of a new messiah!

Released in the U.S. by Roger Corman's New World Pictures under the title THE LAST DAYS OF MAN ON EARTH, this bizarre blend of action, sci-fi and dark satire co-stars Patrick Magee (A CLOCKWORK ORANGE), Sterling Hayden (THE GODFATHER) and Sarah Douglas (SUPERMAN II).

Extras:
THE FINAL PROGRAMME debuts on Region A Blu-ray on January 7th and should cost between $20 - $23! You can obtain a copy now if you pre-order from AMAZON, BULL MOOSE, DIABOLIK DVD, or directly from SHOUT! FACTORY. 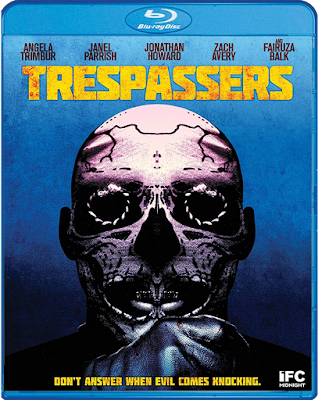 Synopsis: Two couples working through relationship issues rent a gorgeous house in the desert for a sex-and-drug-fueled escape from reality. Sarah (Angela Trimbur, - THE FINAL GIRLS) and Estelle (Janel Parrish - Pretty Little Liars) are longtime best friends looking forward to reconnecting after a period apart; their boyfriends, Joseph (Zach Avery - THE WHITE CROW) and Victor (Jonathan Howard - THOR: THE DARK WORLD), however, are immediately wary of one another.

As tensions escalate over the course of a debaucherous night, things take an unexpected turn when a woman (Fairuza Balk - THE CRAFT) claiming to have car trouble shows up at the door. She's perfectly harmless ... or so they think. As the twists and turns pile up, so does the body count in this stylish, blood-and-neon-soaked thriller which hits with the furious force of a machete to the skull.

Extras:
TRESPASSERS also arrives on Blu-ray (and DVD) on Tuesday, January 7th and should cost between $16 - $18. You can order yourself a copy now from AMAZON, BULL MOOSE, DIABOLIK DVD, or directly from SHOUT! FACTORY.