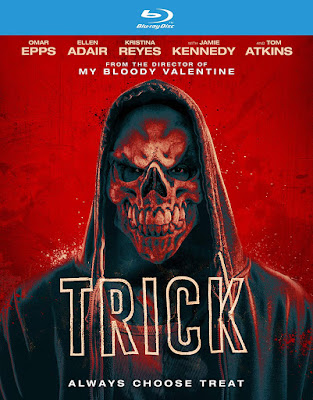 While I haven't seen all of the films he has directed, at the moment I haven't met a Patrick Lussier film I didn't like. DRACULA 2000 was a solid reboot of the world's most famous vampire, MY BLOODY VALENTINE proved to be a shockingly fun (and competent) remake, and the completely off-the-rails DRIVE ANGRY is a total blast. (As far as Nicolas Cage revenge films go, I'll take this one over MANDY any day!)

Teamed with Todd Farmer, the man who wrote the screenplay for JASON X (as well as DRIVE ANGRY and MY BLOODY VALENTINE), is it any wonder that I'm kind of excited for TRICK? While I think it is super bizarre to release a Halloween-themed Horror film in December, I welcome this new slasher movie with open arms and I'm honestly thinking of just making it a blind buy - I trust these guys that much!

Synopsis: On Halloween night in 2015, Patrick “Trick” Weaver massacred his classmates at a costume party. After being arrested, he managed to escape police custody, but not before being shot five times by Detective Mike Denver (Omar Epps). Everyone believes Trick must be dead, but when a masked killer reappears the following Halloween, and every Halloween after that, they realize the nightmare is not over. With Trick wreaking havoc and killing people in increasingly terrifying ways, Denver will stop at nothing to finish what he started and bring the carnage to an end!