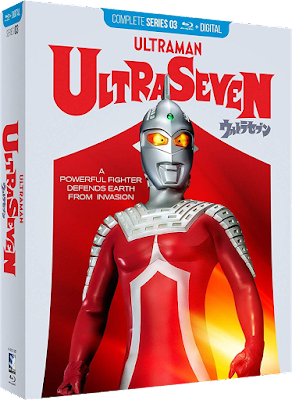 Growing up, ULTRASEVEN was the last of the classic Ultra-series that I saw a few episodes of, so it is with great excitement that I announce Mill Creek's upcoming Blu-ray release of this show! Featuring a new incarnation of everyone's favorite red and silver space giant and his variety of special abilities (like the deadly Eye Slugger, Emerium Ray, Wide Shot, and Ultra Psychic techniques!), this show also introduced us to the "Capsule Monsters," a trio of kaiju that can be called upon to save the day when Ultraseven's human host Dan Moroboshi (Kohji Moritsugu) is incapable of transforming! If any of that fanboy rambling piqued your interest, then please continue onward Vault Dwellers!

Synopsis: In the Age of Interplanetary Wars, Earth is in danger from those who would threaten its very existence. From their massive underground complex near Mt. Fuji the Ultra Guard, an elite unit of the Terrestrial Defense Force, stands vigilant as our decisive first-line of defense. But unbeknownst to his teammates, Dan Moroboshi is secretly an extraterrestrial aiding them in their fight to preserve the future of humanity. Dubbed Ultraseven, he aides the Ultra Guard in fighting back alien hordes that would doom the world to conquest.

A far greater threat emerges, though, as Ultraseven sees the consequences of his power: can he maintain his soul in the face of constant violence, even when that is necessary to protect his newfound friends? Produced by the creative team behind ULTRAMAN, ULTRASEVEN is the third entry in the Ultra Series. One of the best of the long-running franchise, its science fiction themes range from the cruelty of war to social and racial injustices in the grand tradition of Star Trek and The Twilight Zone. For the first time in High-Definition, ULTRASEVEN features the colossal monsters and spectacular visual effects the Tsuburaya team is known for across the galaxy.

Extras:
Mill Creek's new ULTRASEVEN Blu-ray sets will be available on Tuesday, December 10th (but unlike its predecessors, does not come with a digital copy)! The Standard ULTRASEVEN Collection will cost us Ultra-fans between $20 - $24 and can be ordered now from AMAZON, BULL MOOSE, or DIABOLIK DVD! The Steelbook is a bit more expensive, costing in the neighborhood of $25 - $32, and can also be purchased through AMAZON, BULL MOOSE, and DIABOLIK DVD!