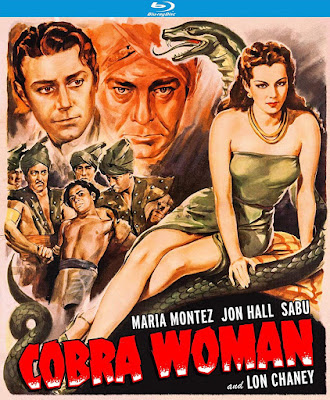 Kino Lorber is kicking off 2020 with a slew of new releases (as you will see when next Tuesday rolls around and our Stock Your Vault column fires back up), including these two classic films! I've never seen either, but definitely have to check them out at some point. COBRA WOMAN is a Pacific isle adventure that features the alluring Maria Montez in a dual role (as well as Lon Chaney Jr. decked out in a ridiculous costume), and DOCTOR CYCLOPS appears to be the granddaddy of every single movie that has people being shrunk via sci-fi technology! If any of that sounds up your alley, then keep reading to get the full details of these two new Kino titles!

Synopsis: She Serpent… in the Garden of Love! From Robert Siodmak, the legendary director of PHANTOM LADY, THE SPIRAL STAIRCASE, THE KILLERS, CRY OF THE CITY, and THE CRIMSON PIRATE comes this romantic action-adventure starring Maria Montez and Jon Hall, the stars of ARABIAN NIGHTS, WHITE SAVAGE, ALI BABA AND THE FORTY THIEVES, GYPSY WILDCAT, and SUDAN!

After Ramu (Hall) discovers that his fiancée Tollea (Montez) has been kidnapped by a lost tribe and taken to a Pacific isle, he and his friend Kado (Sabu - THE THIEF OF BAGDAD, THE JUNGLE BOOK) set out across the seas to find her. They soon discover that the island paradise is ruled by Tollea’s evil twin Naja, the "Cobra Woman," who commands all strangers to be killed on arrival. Not only does Naja have designs on her new prisoner Ramu, but she also desires to eliminate any competition from her benevolent sister. Discover all the forbidden wonders and dangers of the tropics in this beautifully filmed Technicolor adventure! The great Lon Chaney Jr. (THE WOLF MAN, THE BLACK SLEEP, WITCHCRAFT, THE ALLIGATOR PEOPLE) co-stars as Hava.

Extras:
Kino Lorber's COBRA WOMAN Blu-ray (which is apparently a step up from the previous Region B release, according to DVD Beaver's review) will be available on Tuesday, January 7th and should cost between $18 - $24! Secure your copy now by ordering from AMAZON, BULL MOOSE, or directly from KINO LORBER's online store! 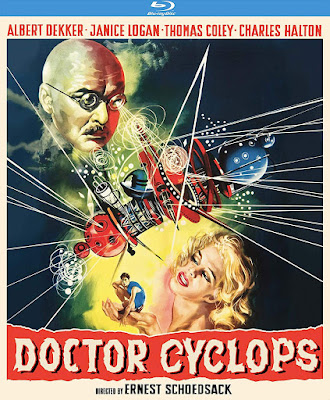 Synopsis: From Ernest B. Schoedsack and Merian C. Cooper, the legendary team behind KING KONG, THE MOST DANGEROUS GAME, and MIGHTY JOE YOUNG, comes this early Technicolor science-fiction classic about a brilliant but deranged physicist who learns how to shrink his enemies to one-fifth their normal size!

Four explorers are summoned to the remote jungle laboratory of the legendary scientist Dr. Thorkel (Albert Dekker - KISS ME DEADLY, THE KILLERS, BEAU GESTE). When they arrive, they discover that his brilliant mind has been warped by radiation and decide to return him to civilization for help. But the half-blind, half-mad DOCTOR CYCLOPS will have none of that and uses his experimental body-shrinking device to stop them. Now, harmless items and small creatures suddenly become giant-sized instruments of death! The impressive use of landmark special effects, which garnered an Oscar nomination (Best Effects, Special Effects), helped make this sci-fi yarn one of the most imaginative and memorable horror-fantasy films of all time.

Extras:
Kino's DOCTOR CYCLOPS Blu-ray will also be available on January 7th, and should cost between $18 - $20! You can pre-order this title today from AMAZON, BULL MOOSE, DIABOLIK DVD, or directly from KINO LORBER!