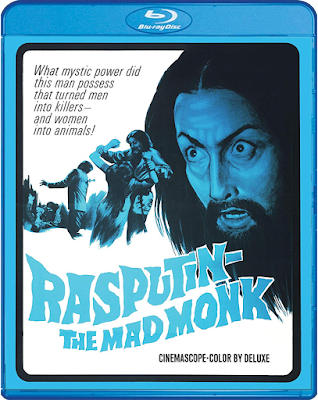 CHRISTOPHER LEE'S MOST CELEBRATED (NON-DRACULA) FILM ROLE, AND THE (SORT OF) SEQUEL TO "THE QUATERMASS XPERIMENT" ARRIVE ON BLU-RAY DISC!

I really need to sit down and watch more classic Hammer flicks - to date, I've only seen maybe two dozen of them! And thanks to the continued efforts of Scream Factory, it seems that I'll be able to watch the bulk of Hammer's Horror and Sci-Fi offerings on Blu-ray disc before by the time 2021 rolls around!

Speaking of which, today Scream Factory unleashed two new Hammer Blus: RASPUTIN - THE MAD MONK, features Christopher Lee as the title character! I have not seen this one yet, but I have frequently heard that this was perhaps Lee's finest performance ever, second only to his famous reccuring role as Dracula! X... THE UNKNOWN is yet another Hammer title that has evaded me. While more of a sci-fi tale (which was supposed to be the first sequel to THE QUATERMASS XPERIMENT), this film features scientists battling a radioactive subterranean terror!

If either of these sound enticing to you (and they should) then continue onward to learn all the details of these two new Scream Factory releases!

Synopsis: Hammer Films' dual reputation for screen shock and flamboyant costume adventure meld in this tale of the real-life "holy man" whose evil charm held the fate of an entire nation in its grip.

In Czarist Russia, Rasputin (Christopher Lee), a peasant monk, mysteriously demonstrates his healing powers by saving a woman's life and asking only for wine and a Bacchanalian celebration in return. But soon Rasputin uses his evil charm and powers to become increasingly manipulative and violent. Ferocious, devious and other-worldly, this uncouth peasant ingratiates himself bit by bit into the lives of the sophisticated royal class ... Christopher Lee's multi-layered performance as Rasputin rates as one of the best portrayals in any film.

Extras:
Scream Factory's Blu-ray of RASPUTIN - THE MAD MONK is now available wherever Blu-ray discs are sold and should cost between $23 - $25! Add this movie to your collection today by ordering a copy from AMAZON, BULL MOOSE, DIABOLIK DVD, or directly from SHOUT! FACTORY. 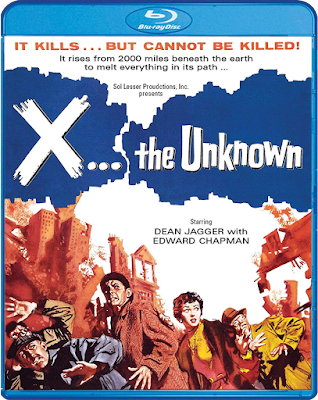 Synopsis: Can anything escape this terror? British commandos on maneuvers become ill with mysterious symptoms and horrific burns. Dr. Adam Royston (Dean Jagger), an atomic scientist from a nearby research station, suspects lethal radiation ... but is mystified by the cause.

At a nearby hospital, the phenomenon reappears and engulfs more innocent people, including a hospital orderly whose skin melts away from his body!

Dr. Royston speculates that the unknown is on a quest to absorb radiation and expand in size and range as it claims more and more victims. As time runs short, he becomes desperate to trap the entity before its power overcomes mankind!

Extras:
A new transfer and new extras? Sign me up! Scream Factory's Blu of X... THE UNKNOWN is currently available at most retailers, and should cost between $23 - $25! Add this quasi-Quatermass sequel to your growing collection today by ordering through AMAZON, BULL MOOSE, DIABOLIK DVD, or directly from SHOUT! FACTORY.