Waldemar Daninsky Tours 16th Century Japan in THE BEAST AND THE MAGIC SWORD! 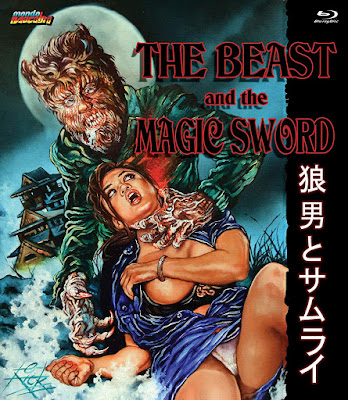 Until recently, I was completely unaware that there were any Japanese werewolf movies other than WOLF GUY and the two KIBAKICHI films, so you can imagine my utter surprise and delight when Mondo Macabro announced their upcoming release of nearly forgotten 1983 classic, THE BEAST AND THE MAGIC SWORD! Featuring Paul Naschy in his role as Waldemar Daninsky, a man forever in search of a cure for his lycanthropy, this film takes our tormented hero to the island nation of Japan where he hopes to end his monstrous curse! Promising werewolf hijinks, samurai battles, and even a duel with a real tiger, I am 100% sold on adding this film to my collection!

Synopsis: THE BEAST AND THE MAGIC SWORD is the last great film from Spanish horror legend Paul Naschy. Although he would go on making and planning films until his death in 2009, he never again attempted the epic sweep and grandeur of this 10th entry into the saga of Waldemar Daninsky, a man afflicted by the curse of lycanthropy.

In this film, we get for the first time an origin story of how the Daninsky curse began back in the 10th century. We then move forward to 16th century Japan where Daninsky has traveled in search of a cure to his affliction. Co-starring Japanese stage and screen veteran Shigeru Amachi, and shot in the studios of Toshiro Mifune, THE BEAST AND THE MAGIC SWORD is a highly successful and colorful melding of European werewolf legends and dark Japanese fantasy. It features a fight between werewolf and tiger, an evil scarlet-cloaked witch who imprisons Daninsky, a sword fight with a troupe of ghost samurai, and many other unforgettable scenes!

Extras:
Mondo Macabro's stellar Blu-ray release of THE BEAST AND THE MAGIC SWORD will be available on Tuesday, February 25th and should cost between $18 - $20! Add this awesome Horror mashup to your personal collection this week by ordering a copy from AMAZON, BULL MOOSE, DIABOLIK DVD, or directly from MONDO MACABRO!