Now Available on Blu-ray from Kino Lorber: THE DAY OF THE DOLPHIN and LIGHT AT THE EDGE OF THE WORLD! 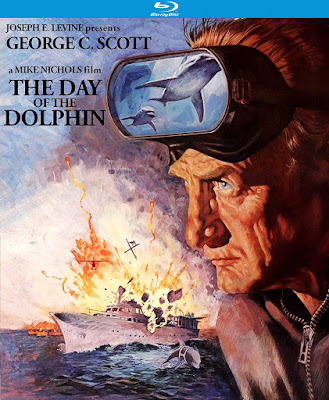 DOLPHINS ARE TRAINED TO KILL THE PRESIDENT, AND KIRK DOUGLAS DUELS YUL BRENNER FOR DIBS ON A SHIPWRECKED MAIDEN IN KINO LORBER'S TWO NEWEST RELEASES!

Well chalk up a few more movies that I need to see before I shuffle off this mortal coil Vault Dwellers! George C. Scott (PATTON, FIRESTARTER, THE CHANGELING) is a fantastic actor and probably lends an air of credibility to THE DAY OF THE DOLPHIN where he teaches dolphins to talk - but little does he know that his test subjects are going to be trained to bump off the President of the United States! LIGHT AT THE EDGE OF THE WORLD (based upon the story by Jules Verne) sounds like a good time as well: Kirk Douglas plays a lighthouse keeper that battles a pirate (Yul Brenner) when a beautiful woman washes ashore on Cape Horn! Both movies are now available on Blu-ray (for the first time!) thanks to Kino Lorber - For the full details of each disc, please continue reading!

Synopsis: Doctor Jake Terrell (George C. Scott) has been training a pair of dolphins for years to understand and speak English. On the same day that he finally has a breakthrough (giving them a limited English vocabulary), a sinister spy group springs the dolphins from containment. When Doctor Terrell discovers they're to be used in an assassination attempt, he races to discover who's the target, and where the dolphins are, before the attempt is carried out.

Extras:
Kino Lorber Studio Classics' THE DAY OF THE DOLPHIN is now readily available and should cost between $18 - $20! You can obtain a copy today from AMAZON, BULL MOOSE, DIABOLIK DVD, or directly from KINO LORBER's online store! 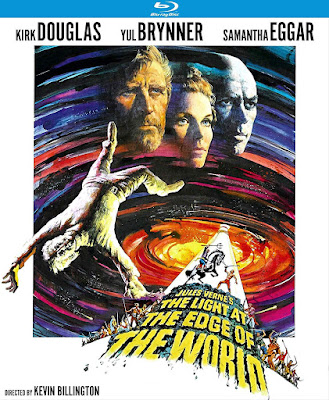 Synopsis: A classic adventure from Jules Verne, the legendary writer of 20,000 Leagues Under the Sea, Journey to the Center of the Earth, Around the World in Eighty Days, From the Earth to the Moon, and The Mysterious Island!

On the bleak, storm-tossed southern tip of South America, a lonely lighthouse guards the world’s most treacherous—and lucrative—shipping lane. But beyond the forces of nature, the lighthouse keepers must also face an even more formidable foe, and soon the turbulent waters become the bloody battleground of two men who fight for control of the cruel Cape Horn and for the pleasures of a helpless, shipwrecked beauty.

Kirk Douglas (THE VIKINGS) is Denton, the iron-willed lighthouse keeper who confronts the murderous pirate captain Kongre, played with delicious malevolence by Yul Brynner (KINGS OF THE SUN) in one of his favorite roles. Samantha Eggar (RETURN FROM THE ASHES) is Arabella, an English noblewoman imperiled by her beauty, desired by both men. The only hope to save the seas and their many travelers flickers in a single dim beacon, known to sailors as THE LIGHT AT THE EDGE OF THE WORLD!

Extras:
THE LIGHT AT THE EDGE OF THE WORLD makes its big Blu-ray debut and should cost between $15 - $20! If you're a fan of Jules Verne's tales, you'll definitely want to pick up this title, which can easily be procured from AMAZON, BULL MOOSE, DIABOLIK DVD, or KINO LORBER!