FRATERNITY VACATION Comes to Blu-ray Disc for the First Time Ever! 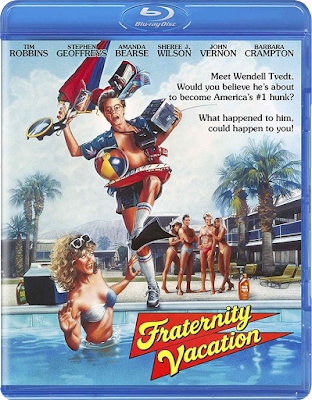 While I've seen quite a few teen sex comedies in my lifetime (e.g. PORKY'S, REVENGE OF THE NERDS, WEIRD SCIENCE, etc.) FRATERNITY VACATION is one that I've honestly never heard of! And that's a total shame because holy hell check out this cast: Tim Robbins (SHAWSHANK REDEMPTION), Stephen Geoffreys and Amanda Bearse (both from FRIGHT NIGHT), John Vernon (NATIONAL LAMPOON'S ANIMAL HOUSE and KILLER KLOWNS FROM OUTER SPACE), and Barbara Crampton (FROM BEYOND)! And oddly enough, this film was directed by the late James Frawley who had previously directed THE MUPPET MOVIE! If any of that info piqued your interest Vault Dwellers, then read more about this Blu-ray release below before you commit to buying it!

Synopsis: For Iowa fraternity brothers 'Mother' (Tim Robbins - JACOB'S LADDER) and Joe (Cameron Dye - BODY ROCK), the only way to score a paid vacation in sunny Palm Springs is to take along supreme nerd Wendell (Stephen Geoffreys - 976-EVIL). When they make a bet with a rival frat to be the first to bed a beautiful woman (Sheree J. Wilson - CRIMEWAVE), their getaway goes out of control. Now with the help of some bikini beauties, a bit of creative party crashing and a local girl (Amanda Bearse - FRIGHT NIGHT) with a very dangerous secret, the ultimate Spring Break is about to begin!

Extras:
Scorpion Releasing's new Blu of FRATERNITY VACATION is being distributed by Kino Lorber and is now available to purchase - it should cost between $18 - $20! Order yourself a copy today from AMAZON, BULL MOOSE, DIABOLIK DVD, or directly from KINO LORBER!