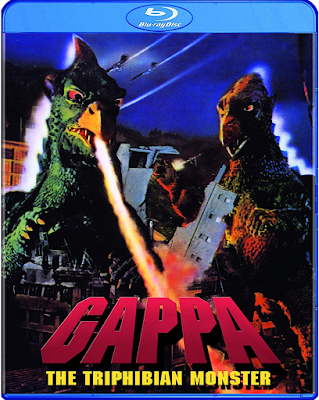 PREPARE TO HAVE YOUR BANK ACCOUNTS DESTROYED BY A CAVALCADE OF KAIJU FROM MILL CREEK ENTERTAINMENT, TOKYO SHOCK, AND SRS CINEMA!

Hot damn - what a time to be alive! Last year brought us the North American Blu-ray debut of Tsuburaya Productions' seemingly neverending Ultraman series and Criterion's GODZILLA: THE SHOWA ERA FILMS set! This year promises more Ultraman, a fantastic GAMERA set from Arrow Video, plus a few surprise titles! Speaking of which, this week is chock full of kaiju goodness!

Mill Creek Entertainment brings THE RETURN OF ULTRAMAN (in both standard and steelbook editions) and ULTRAMAN ORB: THE ORIGIN SAGA to Blu-ray disc, Tokyo Shock comes out of nowhere with GAPPA: THE TRIPHIBIAN MONSTER (aka MONSTER FROM A PREHISTORIC PLANET), and SRS Cinema brings Shinpei Hayashiya's two indie kaiju flicks to Limited Edition Blu-ray disc, namely RAIGA: GOD OF THE MONSTERS and REIGO: KING OF THE SEA MONSTERS! Let's take a closer look at all of this rubber monster goodness fellow kaiju fans!

Synopsis: Originally released directly to U.S. television in 1968 as THE MONSTER FROM THE PREHISTORIC PLANET (in a badly panned and scanned format), Gappa unfolds on a serene tropical island paradise untouched by modern civilization and technology where a dark secret lies dormant for centuries.

When a greedy business tycoon has grandiose plans to turn the island into the world’s largest resort and amusement park, a team of scientists stumble upon a mysterious dinosaur egg. When the egg hatches, GAPPA is born - a mythical giant reptilian bird that the indigenous island people worship as a god. Seeing dollar signs, the tycoon hurriedly ships the baby monster to Tokyo for commercial exploitation. Little does he know that the much larger, irate parents of the infant Gappa follow close behind to rescue their precious baby and wreak havoc upon monster-plagued Tokyo!

This historic rubber-suit epic rode the wave of Godzilla’s golden era and was the only kaiju produced by the prolific Nikkatsu studios. Long out of print on DVD, Media Blasters' Tokyo Shock label brings GAPPA to Blu-ray and remastered DVD in the only legitimate versions of the film officially licensed for North America, finally presented uncut in a fresh high-definition transfer to preserve all of its original widescreen glory!

Extras:
Tokyo Shock's GAPPA Blu-ray is now available to own (as is the DVD), though it appears that not all retailers will be carrying this title. GAPPA: THE TRIPHIBIAN MONSTER should cost between $15 - $20 and can be obtained from AMAZON, BULL MOOSE, DEEP DISCOUNT, or RIGHTSTUF. 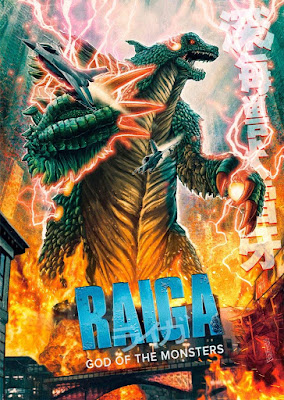 Synopsis: Global warming leads to excessive melting of the southern polar ice cap, disrupting Earth’s ecosystem. The receding ice brings long dormant ancient sea creatures back to life, monsters that set their sights on Japan. Among the kaiju is an enormous sea beast the locals refer to as the legendary Raiga!

The monster attacks the city of Asakusa, bringing death and destruction as he tramples building and lays waste to the military. Can Raiga be stopped, or will all of Japan be destroyed by his fury?

Extras:
SRS Cinema's Limited (to 1,000) Edition of RAIGA: GOD OF MONSTERS should cost you between $25 - $30, and can be obtained from either AMAZON or directly from SRS CINEMA. 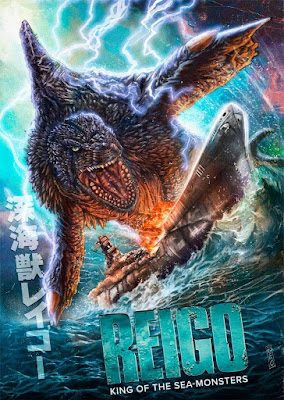 Synopsis: The battleship Yamato, the largest and strongest of its time, is on patrol when a lookout spots a massive shape half-submerged in the distance. Believing it to be an enemy submarine, they fire and score a direct hit. But they are shocked when the object emits a strange cry as it sinks beneath the waves.

Soon after, something much bigger arrives, the massive kaiju Reigo, seething with rage at the murder of its cub. The monster attacks the Combined Fleet with incredible ferocity and awesome destructive power. The naval forces are caught off guard, and Reigo is able to destroy the escort ships and damage the Yamato before returning to the ocean depths.

Now the stage is set for a final battle to unfold between the world’s largest battleship and the mysterious dragon-like monster - who will prevail?

Extras:
The Limited (to 1,000) Edition of REIGO: KING OF THE SEA MONSTERS is now available at several online retailers and should cost between $25 - $30! Get yourself a copy now from AMAZON or directly from SRS CINEMA's online store! 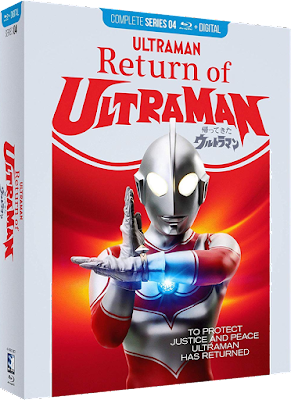 Synopsis: To Protect Justice and Peace - He Has Returned.

The crustal movement and the abnormal climate had occurred repeatedly on a global scale and dormant monsters started to awaken from sleep. A young man named Hideki Go, who was chasing his dream to be a race car driver, lost his life in saving a boy and a puppy that failed to escape in the midst of Monster Takkong's rampage.

However, the new Ultraman, who had come from Nebula M78 to defend Earth, was deeply touched by Go's brave action and resurrected him by uniting as one. After that, Go is determined to fight any enemy that threatens the freedom and happiness of humanity and joined MAT, the Monster Attack Team. While he struggles with his identity gap between Ultraman and Hideki Go, he grows through fighting against the monsters and aliens.

Note: THE RETURN OF ULTRAMAN is the first in the series to introduce the shared Ultra-universe, and was the first one to be produced after the passing of the late and great Eiji Tsuburaya.

Extras:
THE RETURN OF ULTRAMAN makes its North American debut on Blu-ray disc from Mill Creek Entertainment, and is easily obtainable from all of your favorite retailers! If you've been collecting the Standard releases, expect to pay $18 - $40 at AMAZON, BULL MOOSE, or directly from MILL CREEK! But if you're like me and all about those Steelbooks, prepare to spend anywhere from $24 - $50 at AMAZON, BULL MOOSE, or MILL CREEK! 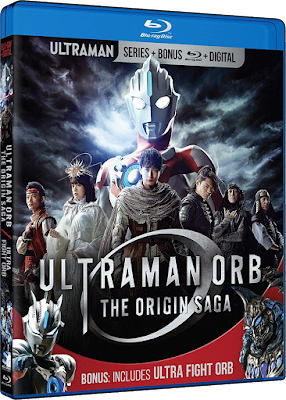 Synopsis: THE ORIGIN SAGA is a prequel to the ULTRAMAN ORB series, detailing the early days of hero Gai Kurenai (Hideo Ishiguro) and his arch-enemy, Juggrus Juggler (Takaya Aoyagi), when they were friends and allies fighting together in their first mission against an alien threat.

This set also includes ULTRA FIGHT ORB: BORROW THE POWER OF FATHER AND SON – A sequel miniseries to ULTRAMAN ORB that introduces Lightning Attacker and Emerium Slugger, plus the debut of ULTRAMAN GEED.

Extras:
ULTRAMAN ORB: THE ORIGIN SAGA makes its North American debut today and should cost between $10 - $20! Fill in yet another gap in your personal Ultraman collection now by grabbing a copy from AMAZON, BULL MOOSE, or directly from MILL CREEK ENTERTAINMENT!