Coming to Blu-ray on February 4th: Lars von Trier's THE HOUSE THAT JACK BUILT and the Soska Sisters' RABID Redo! 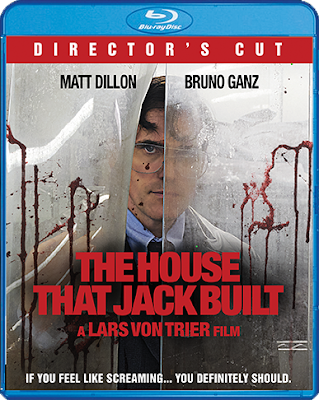 MATT DILLON IS AN ARCHITECT (OF MURDER!), AND LAURA VANDERVOOT SPREADS A KILLER STD IN SCREAM FACTORY'S LATEST OFFERINGS!

THE HOUSE THAT JACK BUILT finally makes its North American debut (it was released on DVD & Blu-ray in Australia by Umbrella Entertainment last year) and comes complete with both the theatrical and director's cuts of the film! Also due out the same day is the Soska Sisters' (DEAD HOOKER IN A TRUNK, AMERICAN MARY, SEE NO EVIL 2) remake of David Cronenberg's RABID. I'm a fan of the classic original, which features Marilyn Chambers as the unfortunate victim that spreads a viral madness to every man she mounts, so I'm a bit wary of this contemporary retelling. Let's take a closer look at both of these new releases, shall we?

Synopsis: Boundary-pushing cinematic visionary Lars von Trier (ANTICHRIST) returns with one of his most daring, masterfully provocative works yet. In five audacious episodes, failed architect and arch-sociopath Jack (Matt Dillon) recounts the elaborately orchestrated murders — each, as he views them, as a towering work of art — that define his "career" as a serial killer. Mixing pitch-black humor, transcendent surrealism, and renegade musings on everything from history to architecture to cinema itself, von Trier fashions a radical, blazingly personal inquiry into violence, art, and the twin acts of creation and destruction. Uma Thurman, Riley Keough, and Bruno Ganz co-star.

Extras:
Scream Factory's release of THE HOUSE THAT JACK BUILT will be available on Tuesday, February 4th wherever Blu-rays are sold, and should cost between $18 - $19! Get your copy now from AMAZON, BULL MOOSE, DIABOLIK DVD, or directly from SHOUT! FACTORY. 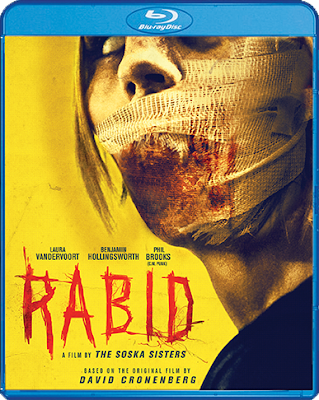 Synopsis: A gruesome accident ... an experimental treatment ... an unstoppable nightmare. Jen and Sylvia Soska bring you a terrifying new take on the legendary David Cronenberg's RABID.

Demure and unassuming fashion designer Sarah (Laura Vandervoort - JIGSAW), horribly disfigured after a grisly collision, agrees to undergo an untested procedure involving stem cells to restore her damaged face. This miracle cure causes her to recover beyond her wildest imagination: Sarah now looks as beautiful as the models she works with. But as her confidence – and her sexual appetite – grows, it comes with a price: Sarah is now the carrier of a contagion that causes her lovers to become violent spreaders of death. As the disease spirals out of control, time is running out in the race to find a cure.

Extras:
The Soskas' RABID also arrives on Blu-ray on February 4th, and should cost between $18 - $19! Order this remake today from AMAZON, BULL MOOSE, DIABOLIK DVD, or directly from SHOUT! FACTORY.